Editor’s Note: For the past two years, AIR Worldwide has been supporting research at Florida International University’s International Hurricane Research Center into the effects of hurricane-force winds on structures. The work has been conducted using a hurricane simulator called the “Wall of Wind." AIR principal engineer Dr. Vineet Kumar Jain attended a Workshop on the Wall of Wind research effort earlier this year. In this article he describes the facility, lays out the main lines of research planned for it, and discusses some early findings.

Central to any effort to mitigate the property damage and losses caused by hurricanes is having a comprehensive understanding of the effects of hurricane-force winds on different types of residential, commercial, and industrial structures. Traditionally, such understanding has been achieved in multiple ways: by analyzing insurance claims data after a hurricane, through post-disaster damage surveys of areas that have been struck by hurricanes, and by conducting laboratory wind-tunnel and "destructive testing" research on sample building materials and scaled-down models of different structures and construction types.

In the first two instances—on-site damage surveys and analysis of detailed claims data—engineers attempt to associate damage data with wind speed observation data to develop estimates of how a hurricane impacts different kinds of structures and construction types. The difficulty is that the actual wind speeds at a particular location at the moment damage is caused cannot be accurately determined after the fact. Anemometers (instruments that measure wind speeds) are not commonly or widely deployed, and while theoretical windfield models, such as those employed by catastrophe models, do a reasonable job at converting gradient-level winds to surface-level winds, they are still only models, limited by such factors as the precision of the land use/land cover data that goes into them.

Nor can it be known exactly how long the wind remained at a particular speed at a particular location or how quickly it decayed; nor, similarly, whether the wind at the time was also driving rain or hail or hurling debris. Such location-specific empirical data, which is necessary for any precision in determining cause and effect, cannot be accurately obtained after the fact. Since damage increases generally exponentially with respect to wind intensity, accurate estimation of the hazard is critical for isolating the effects of different building features on damageability.

In the case of laboratory studies, the amount and kind of damage inflicted on a scaled-down structure by controlled blasts of air in a laboratory are not the same as would be caused to a full-scale structure by hurricane winds of the same speed. Laboratory results obtained using small-scale structures have to be extrapolated to larger ones—thereby introducing imprecision and uncertainty. Similarly, testing a single piece of construction material or only a part of a full structure in the laboratory cannot produce system effects, the impact of environmental conditions, or the stresses of aging, all of which affect the performance of full-scale structures under the real-world wind loads they have to endure.

The Wall of Wind Research Facility

The “Wall of Wind” at the International Hurricane Research Center in Florida is designed to cut through the limitations of laboratory tests and claims data. The facility currently consists of several elements: an array of six industrial fans (funded by RenaissanceRe Holdings Ltd.) capable of producing hurricane-force winds; a computer-controlled mechanical platform, or turntable (funded by AIR), that accommodates full-scale structures and allows them to be subjected to wind phenomena caused by directional changes; an 8,000 square-foot testing enclosure; and a two-fan mobile wind generator that can be used for field studies. A 12-fan array is under development. 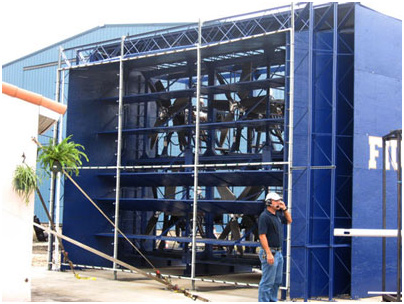 Figure 1. The The Six-Fan Array at the “Wall of Wind” Facility (Source: AIR)

Located on the Engineering campus of Florida International University in Miami, the Wall of Wind is designed to simulate holistic, full-scale effects of hurricane-force winds in an environment that is at once programmable, controllable, and repeatable. No other facility in the United States is currently capable of testing full-scale buildings through a comparable range of damage-causing controlled wind phenomena. 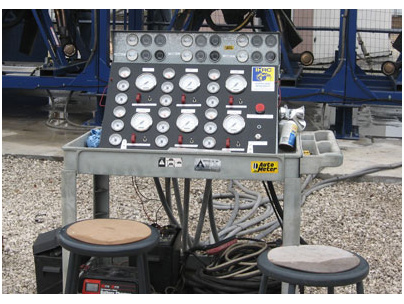 The six-fan facility continues to be tested and calibrated. In early tests, the mean wind speeds and turbulence characteristics of the winds it produced were not consistent with those of comparable hurricane winds. With further testing and by adding both passive modifications and active controls, the research team has been able to generate mean wind speed profiles and turbulence characteristics corresponding to the peak three-second gusts of Category 1 hurricanes (74 to 95 mph).

In order to produce more intense hurricane conditions, these modification and calibration efforts are continuing, and include redesigning the fan engines to maintain a high mean rpm (rotations per minute) while also generating the appropriate turbulence.

The Wall of Wind makes scaling uncertainties moot—and thus can provide a realistic characterization of local wind flow by simulating realistic fluid parameters (such as Reynolds and Strouhal numbers). The facility also will be able to measure accurate wind loads when precipitation is present and to monitor both how well different structures perform and the progressive damage they may experience when exposed to different wind levels.

Fully controlled experiments are planned for three broad areas: aerodynamic studies, hydro-aerodynamic studies, and destructive testing. The Wall of Wind researchers hope that the insights they gain from this research will be as fruitful in guiding the construction of safe buildings as crash-testing has been for the auto industry.

Full-scale aerodynamic testing using the Wall of Wind will include measuring the pressure produced on residential buildings and making force measurements on building components (particularly roofs and the types of equipment that are typically mounted on roofs, such as heating, ventilation, and cooling units; exhaust hoods; communications equipment; condensers; and lighting protection systems). Such equipment is at significant risk during tropical cyclones because its unimpeded exposure to winds allows it to be readily damaged and/or to become untethered. Such detached equipment not uncommonly becomes windborne debris, further contributing to damage and also hindering later post-storm repair and clean up efforts.

Aerodynamic testing of rooftop units already has begun. In one set of experiments, the six-fan Wall of Wind system was used both to measure the wind loads exerted on AC condenser units and to develop a mitigation technique that would alleviate severe wind loads. AC condensers were secured (consistent with general practice) to the roof of a 10×10×10-foot building constructed for the project. Both the building and the units were subjected to the wind flow generated by the Wall of Wind running at 4,400 rpm, and baseline loadings for lateral force, uplift force, and the overturning moment were determined.

A perimeter windscreen (fabricated from metal grating having approximately 50% porosity) was then installed around the AC condensers as a possible means to mitigate the impact of the generated wind. Testing determined that the screen did produce significant reductions in lateral and peak force and of moment coefficients. The results demonstrated that the screen was effective as a retrofit method of reducing wind loading and thus for lessening possible damage to rooftops and rooftop equipment during hurricanes. Such windscreens (as shown in Figure 3 below) also can be used to suppress peak wind loads at roof edges and corners, where most wind damage occurs during a hurricane.

Research in this area will investigate the conditions under which wind-driven rain intrudes through secondary water barriers on roofs, soffits, and window/door/wall interfaces. One set of experiments already undertaken has assessed the efficacy of a set of six different secondary water barriers on roofs. A full-scale test roof (ten feet by eight feet in area) was prepared, covered only with a secondary water barrier (that is, no primary coverings such as shingles or tiles were used), and tested using three slopes (one of 9.5 degrees, one of 18.4 degrees, and another of 26.6 degrees). Artificial seams were scored on the plywood underneath the secondary barriers at one-foot intervals so that any water that intruded would be collected (in clear plastic collectors installed under each roof). The barrier types tested were light asphalt-based, heavy asphalt-based, light synthetic, heavy synthetic, self-adhering asphalt-based, and self-adhering synthetic. Before testing, the specimens were left to season for three weeks in ambient conditions. 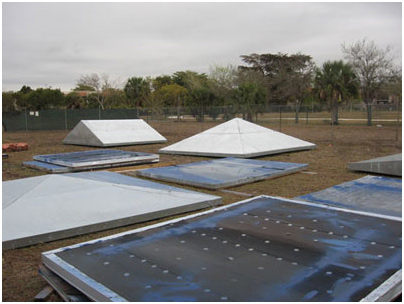 Using the Wall of Wind in destructive testing experiments in the effort to improve building safety is comparable to the use of shake-table experiments by the earthquake engineering community. Early studies are planned for the determination of roof tile and shingle tolerances, effective roof fascia design and construction, and similar design and construction features of full-scale structures. The Wall of Wind will allow the performance evaluation of different building models and components under continual stress right up to failure, thus making it possible to determine effective strengthening measures. In particular, by being able to replicate hurricane rain and windborne debris conditions (using debris-propelling guns) as well as wind conditions alone, the Wall of Wind will allow holistic performance evaluations to be made for the first time.

By providing financial support for Florida International University's Wall of Wind, AIR is supporting research into mitigation technologies that will reduce the vulnerability of properties to extreme wind events. Over the past six months, research on the mitigation of damage to rooftop equipment, the effectiveness of secondary water barriers, vortex suppression, and the destructive testing of roofing elements has been successfully undertaken. Comprehensive testing of full-scale structures by the Wall of Wind—complemented by conventional full-scale and wind tunnel testing and the use of established analytical tools—will help develop new building products and design and construction techniques that can mitigate possible hurricane damage, especially for low-rise structures, and at modest cost.