Twenty Years After Northridge—Can We Fix Earthquake Insurance in California?

Editor's Note:This month marks the 20th anniversary of the M6.7 NorthridgeEarthquake-the major turning point in the history of California's earthquake insurance industry. This article discusses how earthquake insurance has evolved since 1994 and what rolecatastrophe models can have in shaping its future.

Just two years before Northridge, unprecedented losses fromanother U.S. natural catastrophe, Hurricane Andrew, affirmed the value of catastrophe modeling(and the inadequacy of relying on loss experience) in managing hurricane losses, just as the Northridge earthquake would formanaging earthquake losses. However, in contrast to windstormcoverage, which is near universal in the U.S., earthquake take-uprates are exceedingly low. Ironically, the very protection that insurance provided after the Northridge earthquake set in motion acontraction of the market that leaves millions of Californiahomeowners more vulnerable than they were 20 years ago.

California first required all insurance companies selling homeowner policies in the state to offer earthquake insurance on January 1, 1985.3 During the early years of this requirement–prior to the M6.9 Loma Prieta quake that struck the San Francisco Bay areaon October 17, 1989–typical earthquake cover costs USD 2 for every USD 1,000 of coverage per year, with a 10% deductible. Thus, for aUSD 200,000 home, the consumer could expect to pay USD 400 per year in earthquake insurance, with a USD 20,000 deductible. Fewer than30% of California homeowners were estimated to have earthquake insurance policies during this time period.4

After the Loma Prieta earthquake, which led to an insurance claims payout of USD 960 million,5 the California Legislature proposed a mandatory earthquake insurance bill–theCalifornia Residential Earthquake Recovery (CRER) Ac–-that went into effect on January 1, 1992. The bill was intended to cover the costs that fell into the deductible gap–up to USD 15,000 per homeowner during the first few years and then increasing after that as the CRER Fund grew. Every homeowner in the state was required topay a surcharge on their policy at the time of purchase or renewal.

However, the CRER Act was deeply flawed. With no enforcement provisions or penalties for non-payment in place, it became clear that the fund would not be able to collect the anticipated USD 250million in annual fees; high reinsurance costs further jeopardized the fund's solvency. And yet, during the brief time that the CRERAct was in effect–during 1992 only–although fewer than half of California homeowners participated, the CRER Fund made payouts for damage after three earthquakes that year. More than 1,300 homeowners had collected money after the Cape Mendocino earthquakes in April, and nearly 5,000 homeowners whose homes suffered damage during the M7.3 Landers and M6.4 Big Bear quakes on June 28, 1992,collected checks averaging just under USD 6,500.6

Between the Loma Prieta and Northridge quakes, earthquake insurance take-up in major cities increased, soaring to 40% in San Francisco and Los Angeles, although, statewide, fewer than one infour Californians had coverage.7 With more policies being held by people with more expensive homes in these cities,insurers faced increased risk.

The Earthquake that Changed Everything

On January 17, 1994, at 4:31 a.m., PST, a previously unknown blind reverse-thrust fault ruptured nine miles beneath a town called Northridge in the San Fernando Valley. With a magnitude of 6.7 and an epicenter just 20 miles northwest of downtown Los Angeles, it produced the largest ground motions ever recorded in anurban environment, heavily damaging more than 40,000 structures across several counties, including Anaheim stadium, and resulting in USD 12.5 billion in insurance payouts.

To address the void in coverage in the private market, the statestepped in once more. The state-managed Fair Access to Insurance Requirements (FAIR) plan, set up in 1968 as a syndicated fire insurance pool, extended its remit to include homeowners seeking earthquake insurance.

Although the FAIR plan offered minimal earthquake coverage, itwas attractive to those who otherwise could not find affordable coverage in the private market. But it was too attractive. Less than 2 ½ years after Northridge, 236,000 property owners had USD13.5 billion in FAIR plan coverage–USD 10 billion of which was inLos Angeles County. Premiums, though, totaled only USD 40 million.Fears mounted that the plan was growing too fast and that claims from a major earthquake could force a debilitating industry assessment. The insurance commissioner barred the FAIR plan from writing new homeowners' and earthquake insurance policies afterJune 1, 1996.8

After Northridge, the state reduced the extent of coverage thatinsurance companies were mandated to offer to a "mini-policy"–verybasic earthquake coverage at higher premiums (see box for details).But with talk about a publicly managed option being created to provide similar coverage, insurers waited to market these policies.

According to the CEA, gross premiums total about USD 560 millionper year. It has some 800,000 policies in force in the state, and the average premium in 2011 was about USD 750, according to the California Department of Insurance. It reports that its claims paying ability currently exceeds USD 10 billion.

Why Is the Take-Up Rate So Low?

The percentage of California homeowners who have an earthquakeinsurance policy is still about 12%.9 Perhaps thebiggest obstacle to increasing this percentage is the valueproposition and risk perception. Many homeowners assume that theywill not experience a major home-damaging earthquake. Typically,the longer it has been since the previous large earthquake, themore complacent they become. In contrast to flood coverage, whichis required in order to obtain mortgages for properties inflood-prone areas, lenders do not require homeowners to buyearthquake insurance. And homeowners in California who do purchaseearthquake policies are often the ones most at risk fromearthquakes, leading to a market characterized by adverseselection. 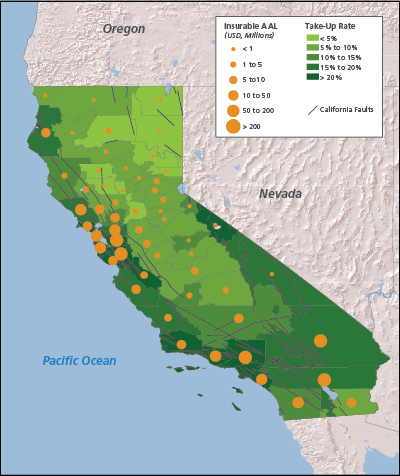 Even for those that are not in denial about the possibility of alarge damaging earthquake, the deductibles for earthquake policiesare so high that when they do the math, they conclude that they arebetter off taking their chances. Some assume that the FederalEmergency Management Agency (FEMA) will step in to providepost-disaster assistance, and still others are likely to simplywalk away from their mortgages if their properties sustain enoughdamage, shifting the financial burden to the lendinginstitutions.

Notwithstanding political realities, a highly regulated catastrophe insurance market throughout the U.S., and low existingconsumer demand, many stakeholders–AIR among them–consider the lowtake-up rate in California to be a systemic failure. While theinsurance industry is much better prepared to handle high lossesthan it was in 1994, its current stake in the game is insufficient to protect home and business owners from disastrous financialconsequences. Figure 2 shows the disparity between what wouldcurrently be covered by insurance, insurable losses under currentpolicy conditions, and total losses to residential properties atdifferent annual aggregate modeled exceedance probabilities.

Under currently policy conditions, an aggregate annual insuredloss of USD 9 billion–which falls near the 1% exceedanceprobability–represents only about 12% of the total damage toresidential properties and only 20% of what's insurable. This more than USD 30 billion gap should be wide enough to give any policy maker pause, and greater ones are possible.

Given the status quo, the next "Big One" would not only put stresses on the uninsured, but would test the resiliency of lending institutions, local and state governments, and the final backstop–the federal budget. Ultimately, as is the case with countlesshistorical catastrophes, a new set of regulations and laws willlikely be enacted that once again will transform the landscape of earthquake insurance in California and the role of private insurers. But it is not a foregone conclusion. The last two decadeshave demonstrated that improving the take-up rate is no easy task,but it is not impossible. While catastrophe modelers certainlycannot solve the problem singlehandedly, probabilistic modeling canprovide insight into what kinds of policy structures might work andoffer compelling ways to improve the value proposition ofmitigation or risk transfer mechanisms, while keeping short- andlong-term financial objectives in mind. In addition, the increasingconvergence of capital markets with the insurance industry meansthat there are more (and more innovative) ways to transfer andmanage California earthquake risk than ever before.

Earthquake models are not what they were 20 years ago. Theunderstanding of seismicity, ground motion, and engineering haveimproved, and advances in technology have allowed models to makesense of high resolution hazard information (such as soil type andliquefaction potential). Furthermore, the realization of theimportance of exposure data quality has led to industrywide effortsto improve the accuracy and level of detail of the data collected.The result is more accurate and granular risk differentiation,based on both seismic hazard and building characteristics.Companies are thus better equipped than ever to perform advancedsensitivity analyses to test alternate policy conditions,underwriting guidelines, and the impact of mitigation features todevelop viable insurance products, and to make better portfoliooptimization and reinsurance purchasing decisions.

Twenty years after the Northridge earthquake, it is time forpublic and private entities to rethink earthquake insurance inCalifornia. Before the next big one, there is room forimprovement and innovation, and AIR is committed to being a part ofthe discussion.