Did the Nepal Earthquake Close the Gap?

The most powerful earthquake to hit Nepal in 70 years struck approximately 34 km (21 miles) from Lamjung at 11:56 NST on 25 April, with devastating consequences for the people and economy of the country. Aftershocks will continue, but the good news is that the next great rupture will likely be some distance away from the densely populated capital city, Kathmandu. 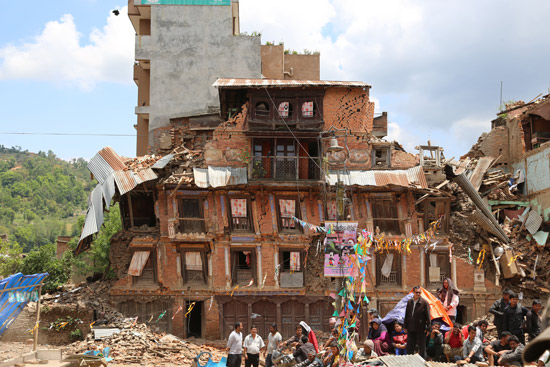 The earthquake occurred in the Himalayas, a 2,500 km long complex fault zone formed as a result of the collision of the India Plate with the Eurasia Plate which began about 50 million years ago. This plate boundary is the largest continental to continental  collision zone on earth. Nearly half of the 4.4 cm/year total convergence rate between these plates is absorbed within the 200 km wide Himalayas, and this is the source of the world's largest continental earthquakes. Nepal occupies 800 km of the most active segment in the center; earthquakes larger than M7.8 occurred herein 1883, 1934, and again now in 2015.

Activity is not uniform along the fault however, and three portions have been identified as seismic gaps (sectors with no great ruptures for a considerable time). Kathmandu is located between the 500 km gap in central and western Nepal where the last known great earthquake occurred in 1505, and the similarly sized gap in the eastern Himalayas that has had no known large ruptures. 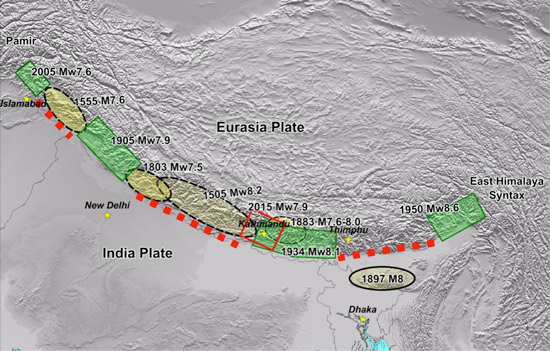 Both the 1883 and 1934 earthquakes were caused by ruptures east of Kathmandu, but the epicenter of the 2015 earthquake lies west of the city and the rupture was directly below it. Location-wise, this earthquake rupture was the worst case scenario for Kathmandu, but the magnitude could have been much higher considering the significant seismic energy that may have accumulated in the entire seismic gap to the city's west.

Worse still, the city lies above an ancient lake bed in a sedimentary basin in the western foothills of the Himalayan Mountains. Not only does it sit directly above the main Himalaya thrust fault zone-the main fault-it contains perhaps 2,000 feet of soft sediments, which tend to amplify ground motions.

Various types of data, including seismologic and GPS data, indicate that the main fault may be fully locked above a depth of 20 km. This means that parts of it (the seismic gaps marked in the figure) may have accumulated about 8-10 meters of slip-enough to cause great earthquakes. If the main fault is fully locked, the accumulated seismic energy may be released by earthquakes of about M8.0 every 10 to 20 years. There have been seven earthquakes of >M7.5 in the last 210 years. The average return period during this two-century time period is about 30 years, which is longer than the theory would indicate; this discrepancy, it should be said, could be due to many factors.

The 2015 earthquake released energy accumulated along the main fault under Kathmandu and was large enough to change the stress in neighboring fault segments. The fault segment to the east is the one that ruptured in 1934, and the probability of another great earthquake there is therefore relatively low. The segment to the west and close to the 2015 rupture is the gap that has not ruptured since 1505, and the recent quake should increase the probability of the next great earthquake rupture there.