Why Projections from Pandemic Models Differ

There are many pandemic models today with different projections and numbers reported daily in the media. How can we know which models to trust? Some of the models available are extremely detailed, and understanding the nuances—even for those who deal with modeling every day—can be challenging.

Often, much of the difference between models is based on what the models are trying to estimate, for example, actual cases versus reported cases. It becomes even muddier when trying to distinguish between models that have different objectives and ones that aren’t using scientific principles.

When you build a model, three major components affect results. You need all three to get it right:

Every model is a simplification of the real world. The AIR Pandemic Model uses the SEIR approach—how a pathogen spreads from people who are Susceptible, to Exposed, to Infectious, to Removed. “Removed” can mean they’ve recovered or, sadly, they have died. This approach works well for global modeling and AIR integrates it with response metrics, country factors, and more to enhance the output of the model.

The AIR model uses hard data from many sources, such as Johns Hopkins University, the World Health Organization, health ministries, epidemiological literature, etc. Factors such as transmission rates and how quickly the virus spreads are considered, along with response and containment measures, such as social distancing and quarantining. AIR’s model looks at international travel from city to city (flight data) and travel restrictions, as well as localized travel, such as commuting or moving from one town to another. Historical experience helps provide a broader perspective of the risk and what may happen moving forward.

At AIR we consider underreported data in our pandemic model. Almost every outbreak of material size has underreporting. This makes sense intuitively and is also borne out in study after study. What you hear in the news are generally the numbers confirmed by lab testing. But to get a true picture of cases, epidemiologists try to infer the actual number of cases. One way to do this is to look at antibody tests. Assuming the tests were performed well, you can know with much greater certainty how many people were actually infected.

It is not so easy to account for variations in some countries that have as many reported cases as others but far fewer deaths. There can be differences in reporting, with doctors or hospitals perhaps not being consistent with the exact cause of death stated or maybe listing multiple causes. It also depends where along the trajectory of the virus a country or state may be. China is much farther along than the United States, where the death rate compared to the number of cases is quite low. Another variable could be that different countries have different procedures in their hospitals.

Another factor that plays into underreporting is countries that have poor healthcare infrastructures. Countries with better tracking systems likely have better means to capture the data. Therefore, they will be likely to have more captured cases than others. This factor is somewhat complicated by the fact that this process isn’t static; changes in how aggressively a country tries to capture the data can also affect the underreporting.

As we have seen in recent months, pandemic disease can spread extremely quickly in today’s highly interconnected world and cause unprecedented loss of life. To address these challenges, the AIR Pandemic Model goes beyond traditional epidemiological modeling to explicitly capture population movement, temporal dynamics of pandemics, varying availability of medical interventions across the globe, and differences in the efficacy of antivirals and vaccines due to patient age. Accounting for these various sources of uncertainty results in a probabilistic solution for modeling pandemics that gives risk managers a robust and comprehensive understanding of potential mortality and life and health insurance losses. 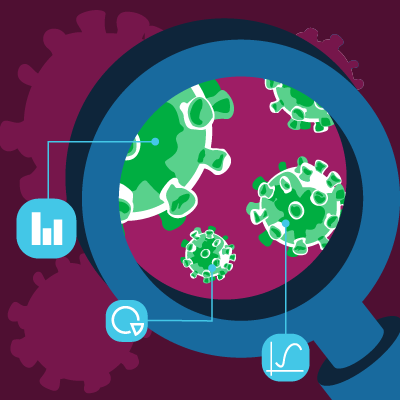