In October, I attended the National Fire Protection Association's (NFPA) Backyards and Beyond Wildland Fire Conference in Myrtle Beach, South Carolina. There were approximately 200 professionals at the conference representing a broad cross-section of the wildfire community, including insurance companies, government agencies, researchers, firefighters, and community organizers. 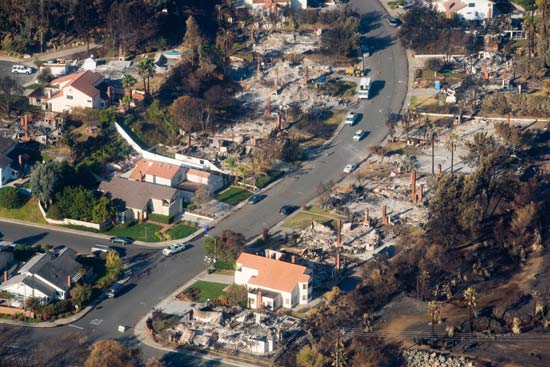 Figure 1. An aerial view of homes in the Rancho Bernardo neighborhood, some of which survived the Southern California wildfires in 2007. (Source: Andrea Booher/FEMA)

The damage distribution from wildfire is essentially binary. Typically, there will be some structures within a burn perimeter that sustain little or no damage, and others that are a complete loss. From a homeowner's perspective, the burning question is, "how do I make my home one of the houses that a wildfire will miss?" An insurer will ask, "how can we predict which houses are most likely to survive a wildfire?"

These are incredibly complex questions with many interconnected variables. Wind conditions (speed and direction) at the time the fire moves through an area, terrain relative to the direction of fire spread, and fuel conditions, all have an impact on fire behavior. Many of these are location-specific at a very fine spatial scale, vary on a daily basis, and are somewhat out of our control. However, fuel remediation and prevention efforts before an event occurs are two factors that can be controlled and measured, and make a significant difference should a wildfire move through the area.

A lot of attention is currently being given to the NFPA's Firewise program, which encourages communities to preemptively prepare for wildfire through remediation efforts such as fuel reduction and cleanup. The approach states that reducing the available fuel in an area can prevent a fire from moving into the community to begin with, so firefighters won't have to tackle the fire on a house-by-house basis. This idea has been so successful that some insurers are starting to give discounts for members living in Firewise communities in certain wildfire-prone states to encourage participation.

Although prevention efforts across an entire community are best, even individual properties that follow basic mitigation techniques can make a difference. Many structures lost to wildfire are actually lit from embers that land in a fuel close to them. For example, a burning tree or house can generate embers that alight mulch next to a nearby house or the leaf debris stuck in a nearby gutter, leading to the ignition of a neighboring property. Increasing setback distance, cleaning out gutters, and screening in porches and vents reduces the number of fuels available for embers to land on and increases a structure's likelihood of survival.

Throughout the conference, firefighters continually expressed the importance of mitigation work. If they come upon a property where preventative measures haven't been implemented, they will often move their defensive line to the next house because they know that property has very little chance of surviving. In a triage situation where limited resources must be managed, firefighters must concentrate on fighting and stopping a fire at a natural fire break. Houses that have implemented recommendations for defensible space and fuel cleanup offer the greatest chance of success, because homeowners took the first steps toward protecting their home before the fire arrived.