Winter is officially over, but in the northeastern U.S., it seems to be hanging on. In fact, the biggest snowstorm of the season just brushed by Cape Cod last weekend. While many locations in the east have experienced one of their coldest winters in decades, many places out west have actually experienced their warmest winter...ever. It's been quite a season.

We've heard a lot about the polar vortex being the culprit of this year's deep freeze, but the modern technical definition of the phenomenon refers to the cyclonic circulation way up in the stratosphere centered over the North Pole. It's nothing new and has been known about since at least the 1930s. And while the vortex often changes shape, the changes do not explain what happens at the Earth's surface.

The cold weather in the east should instead be attributed to a southward dip in the jet stream (upper-level trough) and a concurrent poleward bulge in the jet stream over the western U.S. It was the classic positive Pacific-North American Pattern (PNA)-a ridge out west and a trough in the east-but on steroids. On the west side of the ridge, winds from the south brought mild air and the warmest January and February temperatures on record to places like Los Angeles, Phoenix, and Las Vegas, to name a few. To the east of the ridge, north winds brought cold air to the Great Lakes,Midwest, and eastern states. The Great Lakes were as frozen as they have been since the winter of 1978-79. 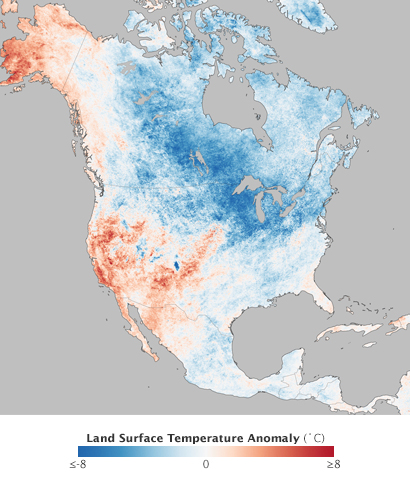 As part of this positive PNA package, unusually high snowfall totals occurred in the Midwest and Mid-Atlantic states. Places like Detroit experienced their highest December-February totals in at least 50 years. Philadelphians had over 300% of their normal snowfall total. Storms continuously formed as they moved southeastward from central Canada and intensified as they moved across the Great Lakes and exited the east coast around Baltimore and Washington, DC. Rather than turning up the coast toward New England, they often moved more out to sea and provided a parting shot to Boston, MA, and Portland, ME. Although these cities have seen above normal snowfall levels, these were rivaled, if not surpassed, by the totals farther south (see the National Climatic Data Center summary).

Despite high totals in the Northeast, there was no real gang buster snowstorm and certainly nothing like the March 1993 "Storm of the Century." There have just been a lot of medium-sized events, with the snow sticking around for weeks on end thanks to the cold temperatures. The transient nature of these storm tracks was the result of the positive PNA pattern combined with a positive North Atlantic Oscillation (NAO) signal. The NAO is an index measuring the anomalous sea level pressure difference between Iceland and the Azores. A positive index means there is a strong pressure difference-strong westerlies and storms rapidly departing the U.S. east coast.

The implications for the U.S. insurance industry can be significant. Already, this winter ranks among the top six for U.S.insured losses and losses may still go higher. The reason? Locations that do not normally experience high snowfall totals can see persistently high snow depths and the snow load on roofs can grow through the winter. Moreover, because the snow and ice can persist on roofs, roof failures can occur more easily from a variety of wind speed and direction conditions (on gutters and overhangs, for example). Persistent cold can lead to pipes bursting, too-again in areas that are not used to such harsh conditions.

So, I would imagine that the question on a lot of people's minds is: Was this past winter's weather the result of climate change? Some theories have attributed the exceptionally stationary nature of this and other atmospheric patterns (including heat waves) to global warming reducing the pole-to-equator temperature difference and causing certain atmospheric waves to amplify and move more slowly around the earth. But the truth is that the historical record is just too short to make any justifiable conclusions, which makes it difficult to even say that the probability for such extreme weather has increased, let alone that this particular season was the result of climate change.