AIR's historical U.S. hurricane catalog, which covers events starting in 1900, provides a robust view of landfalling and bypassing hurricanes. From this catalog, we can discern some interesting signals with respect to losses when historical events are simulated using current day exposures, notably the proportion of losses due to wind versus losses due to storm surge.

Surge losses range from 0% of total losses to near 100%, with relatively weak events representing both ends of the loss spectrum. This broad range of surge loss percentages may seem counter intuitive. You might expect surge loss to correlate closely to wind loss, since the fundamental process of storm surge generation is wind interacting with water. 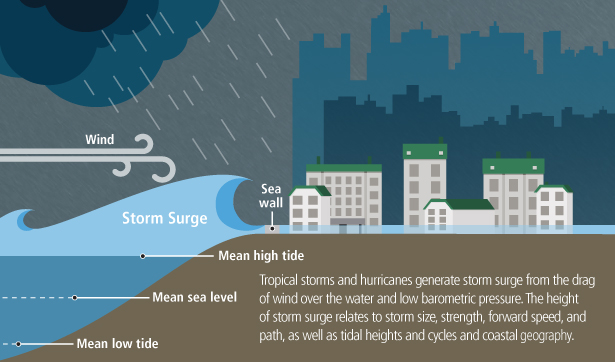 Hurricanes making landfalls at tidal extremes are infrequent, so studying the historical record reveals some definite and useful information. For example:

These numbers suggest a positive relationship between strong winds and damaging surge, confirming the expected correlation between large surge losses and total losses for individual events.

The ratio of surge losses to total losses when computed across events of varying sizes and intensities yields another interesting and consistent correlation. From an average annual loss perspective, surge losses to all properties-before any insurance coverage is applied-modeled at today's exposures and sea levels, equals approximately one-third of the sum of total losses. Even when looking at events at different loss levels-greater than USD 1 billion, USD 5 billion, USD 10 billion, USD 25 billion, or USD 50 billion, for example-the percentage of total loss caused by surge is consistently between 35% and 40%.

Although consistent across long time periods, these figures cannot be used to predict storm surge losses for a given hurricane because of the unique characteristics of each individual event. Yet, even without predictive power, they provide us with interesting insight into the interaction of hurricane winds and surge and the losses they produce, and they underscore that storm surge can be a significant proportion of hurricane losses.