The M7.8 Kaikoura Earthquake Caused More Damage to Modern Buildings than to Older, Earthquake-Prone Ones

The M7.8 Kaikoura earthquake that struck New Zealand’s South Island last month caused shaking that lasted more than four times as long as the shaking during the February 2011 Christchurch earthquake and caused damage to buildings in places as distant as the nation’s capital, Wellington, at the southern end of North Island. Contrary to what many anticipated, older, low-rise buildings there—many of which are categorized as earthquake-prone—experienced minimal damage, but the capital’s newer, taller (8 to 15 stories), more modern buildings suffered significant damage, according to the Earthquake Engineering Society (EES). Why?

Earthquake-induced building damage is caused by a building's dynamic response to ground motion, which varies depending on characteristics of both the ground motion and the building. One important ground motion characteristic in the context of building damage is frequency, or number of complete cycles of vibration per second. A building responds to frequency content in ground motion by vibrating, and its vibration tends to center around a particular frequency—its natural frequency. Tall buildings have lower natural frequencies and, when the ground motion is also dominated by low-frequency (long period) waves, the ground motion and building resonate, leading to greater building displacement and therefore damage. Shorter buildings, by comparison, have higher natural frequencies; for them, high-frequency (short period) seismic waves have the biggest impact. Low-frequency seismic waves can travel great distances, while high-frequency seismic waves tend to attenuate quickly over distance. For that reason, when the seismic waves from the M7.8 Kaikoura earthquake finally reached Wellington, low-frequency, long period waves dominated. In addition, soft soil deposits under the buildings in the downtown area, especially near the shore of Wellington Harbor, contributed to the amplification of long period waves and exacerbated the damaging effects on mid-rise buildings. 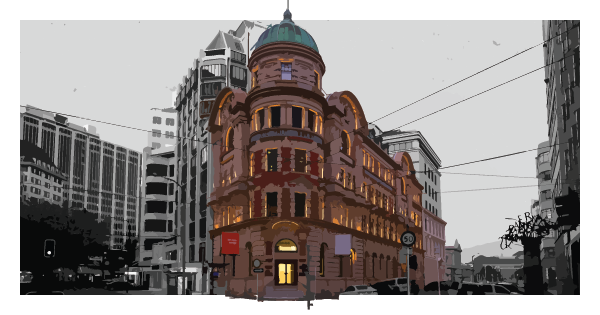