Although rare, tsunamis can occur on the Atlantic coast of North America

Did you know that, although rare, tsunamis can occur on the Atlantic coast of North America? Unlike large Pacific tsunamis that are generated by subduction zone earthquakes along the "Ring of Fire," Atlantic tsunamis are typically caused by earthquake-triggered underwater landslides. Perhaps the best-known was generated by the M7.2 earthquake that struck 250 km south of Newfoundland on November 18, 1929. The temblor severed a dozen transatlantic cables and initiated a tsunami that was recorded as far away as South Carolina and Portugal.

Three waves were noted, causing local sea levels to rise between 2 and 7 meters and to reach as high as 13 meters at the heads of several long, narrow bays on the coast of Nova Scotia. Houses, ships, and businesses in more than 40 communities were destroyed, and losses were estimated at the time to be more than one million dollars. Twenty-eight people were killed. 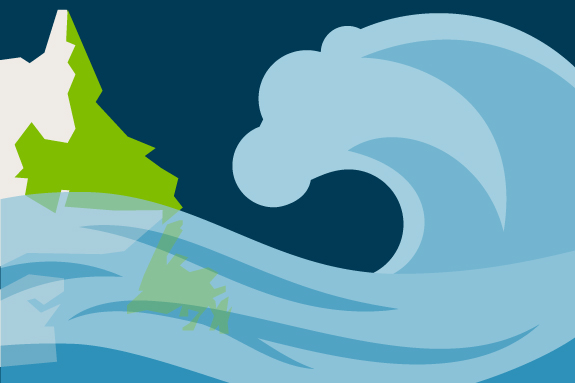