Earthquakes impact buildings and infrastructures through the ground motions they create. As such, it is important to have a realistic understanding and the forecasting tools for estimating the ground motions of earthquakes of different magnitudes occurring in different tectonic environments. During the last half century, there has been a concerted global effort to record earthquake ground motions. Using this data seismologists have developed empirical ground motion prediction equations (GMPEs) to estimate ground motions as a function of magnitude, distance, faulting mechanisms, and other source and path parameters.

With the notable exception of the 2003 Tokachi Mw 8.0-8.3 earthquake, GMPEs developed for Japan before the Tohoku earthquake mostly used data from quakes smaller than Mw 8.0. In predicting ground motions for earthquakes larger than Mw 8.0, such as mega-thrust earthquakes along the Japan Trench and the Nankai Trough (where magnitudes could reach 9 and above), extrapolation inferred from ground motion data of smaller magnitudes was typically used. This could potentially introduce systematic bias due to the lack of data.

Many megathrust earthquakes of M8.5 and larger have occurred in subduction zones in the last century, but few were recorded by modern instruments designed to record strong ground motions. The strong motion records that do exist for large megathrust subduction earthquakes that occurred in the last decade, however, present an opportunity for scientists to study the characteristics of such earthquakes. The dense K-Net and KiK-net instrumental networks, for example, have yielded more than 1,000 ground motion recordings from the Tohoku earthquake.

In particular, researchers found that the increase with magnitude of low frequency (long period) ground motions saturates at larger magnitudes. Such saturation—ground motion ceasing to increase as the instruments get closer to the source—is also seen in ground motion data from the 2010 M8.8 Maule earthquake. These studies led to a revision of GMPEs for megathrust earthquakes.

For seismic hazard modeling and risk mitigation, Japan’s Headquarters for Earthquake Research Promotion (HERP) updates the national seismic hazard model every year. The resulting national hazard map is expressed in terms of peak ground velocity (PGV) and JMA intensity (Japan Meteorological Agency Intensity scale). Since the Tohoku earthquake, HERP has made many incremental changes to the seismic source model to account for the improved understanding of the seismogenic sources in Japan and more conservative consideration of uncertainties concerning earthquake sources. Before the Tohoku earthquake, for example, based primarily on historical observations, HERP considered the largest earthquake that could occur in and around Japan to be M8.5.

Since the Tohoku earthquake, HERP considers that all major trenches in Japan can produce earthquakes of M9.0 or larger. The probability of earthquakes larger than M8.5 in the Nankai Trough and the Kurile Trench subduction zone has also significantly increased in HERP’s 2019 time-dependent model. In addition, the latest HERP models have also included seismic sources whose characteristics are not well-known from historical data. These sources include non-characteristic earthquake sources in the subduction zones (both interface and intra-slab earthquakes) extended to a depth up to 200 km.

As a result, the overall probability of larger magnitude earthquake rupture impacting Japan has significantly increased in the latest national hazard models. The overall hazard at the 475 or longer return periods has increased due to the seismicity model change (Figure 3).

But No Updates to the Ground Motion Model

There have, however, been no updates to the ground motion model. HERP has used the empirical ground motion prediction equations of Si and Midorikawa (1999) (SM1999) for its probabilistic seismic hazard map (PSHM) since the first version was published in 2005. The hazard is expressed as peak ground motion velocity (PGV) and JMA intensity, which is converted from PGV using the empirical relationships of Midorikawa et al. (1999). GMPE SM1999 was developed using historical strong motion data from earthquakes up to Mw 8.3. Although SM1999 did not consider magnitude saturation, HERP capped the magnitude at 8.3 when using SM1999. For all earthquakes larger than Mw 8.3, the equation for Mw = 8.3 is used.

Both PGV and JMA intensity have been widely used in Japan to estimate damage from earthquake ground shaking. The progressive change in the PGV and JMA intensity hazard in Japan implies that seismic risk assessed based on PGV or JMA intensity would also increase significantly. Many earthquake risk assessment models, however, use spectral acceleration of periods corresponding to building natural periods to assess building damage. Mid- to high-rise buildings are considered more sensitive to seismic waves of period 1 second or longer. Therefore, damage to mid- to high-rise buildings is more dependent on long period seismic waves. A reduction in long period strong motion hazard implies that the overall risk of mid- to high-rise buildings may reduce.

The national seismic hazard expressed as PGV strong motion and JMA intensity shows a significant increase since the Tohoku earthquake, primarily because of changes to the seismicity model. In light of the Tohoku ground motion recordings at seismic stations across the whole of Japan, the long period ground motion hazard (such as Sa1s and Sa3s) shows a substantial reduction due to the increasing saturation of ground motion with magnitude. As a result, seismic risk for mid- to high-rise buildings assessed based on building natural period–dependent spectral acceleration may decrease in spite of the hazard increase due to seismic source model changes.

Massachusetts' Largest Earthquake Caused Alarm in 1755 and Should Today November 18, 2021 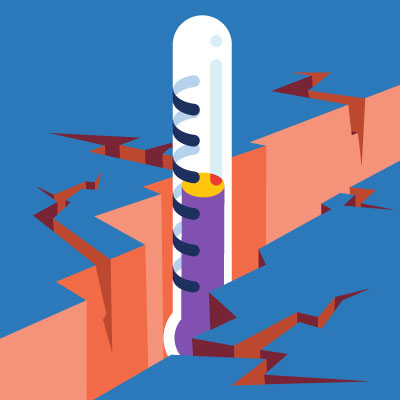 How Climate Change May Influence Earthquakes Around the World November 15, 2021