How Sinkholes Form and Why They Matter

The Caribbean is a highly active, complex seismic region and earthquakes there have been making the headlines lately. A series of earthquakes—one of them an Mw 6.4—impacted southwestern Puerto Rico in early January. And on January 28, 2020, an Mw 7.7 earthquake occurred just 80 miles southwest of the Cayman Islands and 72 miles northwest of Hanover, Jamaica.

The Mw 7.7 quake was felt as far away as Miami. With heightened awareness of the regional seismic hazard following the earthquakes impacting Puerto Rico, many Jamaicans evacuated from their homes and offices. Fortunately, the epicenter was located far enough offshore that no major structural damage was sustained from ground shaking; however, sinkholes opened up as a result of the violent shaking, causing some infrastructure damage to pipes and sewers. These developments are not surprising from a geologic perspective, as the western Caribbean islands, Florida, and the Bahamas are particularly susceptible to sinkhole formation.

In the western Caribbean many regions are underlain by karst terrains, which are soluble carbonate rocks (usually limestone or dolomite) or evaporites (salt, gypsum, and anhydrite) that have been dissolved by acidic surface water or groundwater, a process known as dissolution. Over time, these karst landscapes are susceptible to the formation of sinkholes.

Some sinkholes, such as the Blue Hole Mineral Springs in Jamaica, are popular tourist attractions due to their grand size and clear calm waters. Typically, however, the perception of sinkholes is not a positive one and they are often described in anthropomorphic terms as “swallowing” objects as large as cars and even homes.

Sinkholes can occur at any time and are not associated exclusively with earthquakes. In fact, there are few confirmed cases where sinkholes have opened because of natural earthquakes, although the seismic energy released from an earthquake could certainly trigger a collapse where underground cavities already exist. Seismic vibrations may destabilize underground structures supporting hollow voids, thereby leading to collapse. Alternatively, the agitated soil and disturbed groundwater may have settled in a way that overburdens sediments atop pre-existing buried cavities, causing them to cave in.

Aside from natural collapse (e.g. earthquake, heavy rains, droughts), some sinkholes have collapsed due to human activity such as underground mining and wastewater injection. Mine roofs can fail when the extracted or “mined” material is removed from the subsurface without leaving enough support for the land above. Sinkholes can also develop when the groundwater levels are lowered from mining activity or when pipe lines break, leaking fluid into the surrounding rock. Similarly, the injection of wastewater from oil extraction into disposal wells can alter the natural water-drainage patterns in the subsurface, causing new waterways to develop, which may lead to sinkhole formation.

A Risk that’s Hard to Anticipate

Several geophysical technologies exist that can be used to identify buried cavities, including microgravity measurements, seismic reflection surveys, electromagnetic conductivity surveys, and ground-penetrating radar. For these technologies to be effective, however, they must be conducted close to or directly above the sinkhole, and with such a localized geologic phenomenon, it is difficult to know where to look for their formation. More recently, however, researchers have been leveraging interferometric synthetic aperture radar (InSAR) to monitor surface deformation and potentially identify precursor subsidence indicative of a sinkhole. Sinkhole collapse can potentially be mitigated if these areas are identified early.

The sinkhole collapses observed in the Caribbean were small and fortunately did not cause much damage. The economic and potentially catastrophic impacts of sinkholes, however, should not be taken lightly. According to the United States Geological Survey, 20% of U.S. land is susceptible to sinkhole formation, with the states most at risk being Florida, Texas, Alabama, Missouri, Kentucky, Tennessee, and Pennsylvania. 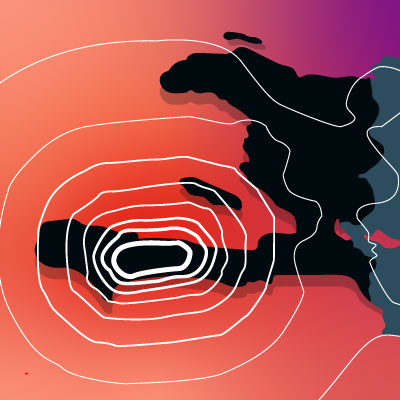