What Is a Fuels Layer and Why Should I Care?

Whether you want to model bushfires on a few acres or on large swaths of territories across the entire continent of Australia, you first need to model what those bushfires burn: the “fuel” on the ground. For this purpose, we develop a fuels layer. While the final solution may appear to be simple, the underlying problem—and the algorithms used to solve it—are surprisingly complex.

The challenge is having to map the entire continent of Australia into only 16 categories at a high resolution (30x30 meter cells in the work product, 90x90 meter cells in the final product). To get a sense of just how large an undertaking this is, consider that the area of Australia is about 7,692,000 km2— more than 8,500,000,000 of those 30x30 meter cells! One message conveyed by those numbers is that a fuels layer is an extreme simplification. However, when created properly, a fuels layer provides the basis for accurately propagating realistic bushfires wherever they may occur.

In developing a fuels layer for Australia, AIR scientists used Landsat 8 satellite imagery from 2015. In broad terms, remote sensing is the science of obtaining information about conditions on the ground by examining the electromagnetic spectrum of reflected sunlight from such an area. Our Sun emits a continuous stream of radiation that for practical purposes may be considered to be unvarying. When that solar radiation strikes the Earth’s surface, part of it is absorbed and part is reflected. The reflected radiation can be detected by instruments aboard a satellite—in this case, the Landsat satellite. In an ideal world, the same patch of ground will reflect radiation with exactly the same spectral signature each time it is detected. In the real world, however, things are a bit more complicated. As seasons change, for example, so may the vegetation on the ground. Clouds may interfere with and alter the spectral signature of both the incident solar radiation, as well as that of the reflected radiation that the satellite detects.1

AIR scientists adapted ISODATA clustering algorithms to identify different cells as being “similar.” Here, similar means the cells (or pixels) contain nearly identical spectral signatures, which can be mapped to a specific type of grass or brush, eucalyptus forest, desert sand, water, or a number of other land cover classifications. Each cluster of spectral signatures is refined in size based on its covariance. If the covariance is larger than AIR’s defined maximum, the cluster is split into two new clusters. This ISODATA maximum covariance approach is run iteratively until the clusters are refined from broad categorizations to narrower ones (i.e., one shrub category to three categories of shrubs, which take into account the underbrush characteristics). Each final resolved cluster is assigned to one of the model fuel categories that are used as the basis for simulated bushfire propagation. The resulting map for Australia is shown in Figure 1, with the increased delineation between fuel classes shown in Figure 2. Perhaps now fuels layers will get the kind of appreciation we think they deserve!

Learn more about the AIR Bushfire Model for Australia 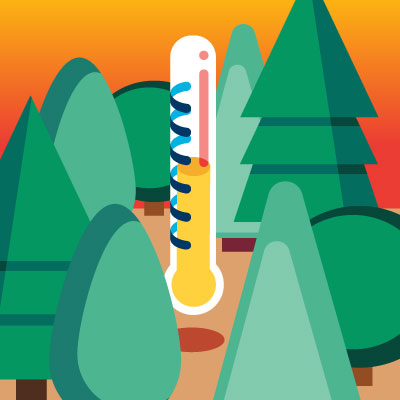