The M8.3 Illapel earthquake that struck the coast of Chile near Santiago late on Wednesday, September 16, serves as a reminder that the western coast of South America is one of the most seismically active regions of the world. It is located along the southeastern circum-Pacific seismic zone, which accounts for nearly 75% of the total seismic energy released globally each year.

For some time now AIR seismologists have been reassessing the seismic hazard potential of regions along the 7,000 km-long South American Trench. More than a dozen damaging earthquakes greater than M7.0 have occurred along the trench since 2007, among them the powerful 2010 Maule and 2014 Iquique events off the coast of Chile.In 1960 the most powerful earthquake ever recorded-M9.5 according to the USGS-occurred on the trench near Valdivia, off the coast of southern Chile.

Powerful earthquakes can change the stress levels along faults-changes that could trigger a series of large earthquakes. To get an insight into how these could happen, it is important to understand how stresses from these great earthquakes are accumulated and released through time. Since 2010, AIR scientists have been studying the release and transfer of tectonic stresses that resulted from the M8.8 Maule earthquake-in particular,quantifying the impact of stress transfer on the probability of other destructive earthquakes occurring nearby.

Along the Nazca Trench (where the oceanic Nazca Plate subducts underneath the South American Plate at approximately 80 mm per year), modeled earthquakes are usually represented by a single rupture plane that partly or entirely releases the accumulated stresses within that fault segment.

However, what really occurs is a rupture (or a series of many ruptures) along smaller patches called asperities. These patches can be topographic highs such as remnant volcanic centers or fractures along the subducting plate that engender high friction, preventing the free slip of the interacting plates, and accumulating stress. These asperities have been found to be associated with seismic events that discharge built-up stresses within the fault or subduction zone interface. The pattern of ruptures along these asperities may be simple or complex, depending on the stress conditions present. Large earthquakes can alter the local state of stress and influence the probability of rupture on neighboring asperities or sections of the subduction interface. 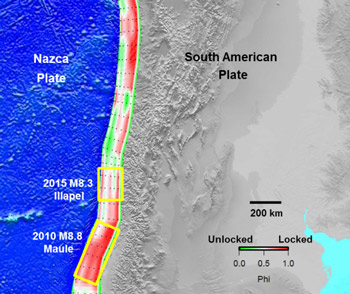 To account for these physical complexities, AIR scientists developed a novel way of modeling time-dependent seismicity. GPS measurements from all over South America are used to construct kinematic block models to determine fault locking, quantify how much deformation is happening, and indicate how much elastic energy is stored within faults and within the crust.

Kinematic block models reveal high strain accumulations along"locked" subduction zone segments located offshore and beneath the coasts of Colombia, Ecuador, Peru, and Chile that could rupture in the future. These sophisticated models actually provide a stress or strain accumulation image of the fault interface-a geophysical "CATscan" of sorts.

Time-dependent seismicity models take this information much further. By combining the timing, location, and moment information from past earthquakes with the fault locking pattern, AIR scientists can now model how neighboring asperities (or subduction zone regions) are being loaded or unloaded after large earthquakes,with strain accumulation patterns mapped at high resolution. With such detailed information, areas ripe for a large magnitude earthquake or those that have undergone stress release (and hence have a lower probability of a large earthquake) can be determined.

The AIR time-dependent models had indicated great potential fora large earthquake to occur on the Nazca Trench north of the Maule area, which is where the recent 2015 Illapel event and the 2014 Iquique event took place. The slip distributions of these recent earthquakes as reported by USGS show excellent correspondence with the locations that were designated as high risk in AIR's seismicity model.

Research conducted by AIR scientists has resulted in significant improvements to AIR's Earthquake Models for South America, which were recently updated in June 2015. All facets of the models-hazard, local intensity, vulnerability, and loss calculation-have been upgraded, and the effects of liquefaction and tsunami are now explicitly modeled. Please read this AIR Currents article for more information on modeling seismic risk in South America.