Earthquake Early Warning Systems Do More Than Save Lives

You can't forecast earthquakes the way you can hurricanes or floods, but Earthquake Early Warning (EEW) systems may be the next best thing. They don't anticipate temblors, but react rapidly when one occurs, enabling warnings to be issued before the first shaking is felt.

Fast-moving P-wave energy radiates from an earthquake before the more dangerous and damaging surface waves, and can be used to estimate the epicenter and magnitude of the temblor. The trick is to accurately identify P-waves without crying wolf. The longer the time separation between the arrival of the P-waves and that of the surface waves, the more time there is to respond-critical time in the case of strong earthquakes. For teleseisms (earthquakes at far distance), the time separation is long, but for local earthquakes it is very short.

P-waves can be detected when they pass through a grid of seismometers on the ground in a pattern somewhat analogous to how geophones are used in the oil exploration industry. Using a system of computers, the origin of the P-waves can be resolved, including the calculation of arrival times of the first damaging surface waves. Probable ground shaking intensity can then be calculated and a warning issued. 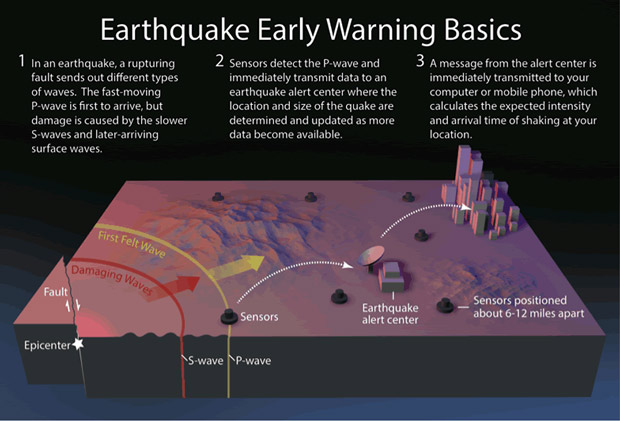 The amount of warning depends on the speed of the EEW system and the distance between the epicenter of the earthquake and the community receiving the alert. It can vary from a few seconds to a minute or more, depending on the distance from the quake's origin.

That might not sound like a lot, but those few seconds can give people a crucial opportunity to find a place of safety-to shelter under a table, for example, or exit the building. Workers may get the chance to move away from dangerous machines or materials, and medical procedures can be halted before patients are harmed. Even with the briefest of warnings, many injuries and deaths can be prevented.

With this system in place, trains have an opportunity to slowdown or stop, reducing the risk of derailment, and taxiing aircraft can be brought safely to a halt. As well as reducing their speed,vehicles can be prevented from entering bridges and tunnels, where entrapment from rockslides can happen. Emergency services can jump-start their response; fire stations, for example, may be able to open their garage doors before power fails or structural distortions jam them.

A few seconds' notice may be enough for automated systems to be triggered to prevent damage and loss. Industrial systems and processes or production lines can be shut down, reducing post-event business interruption. This is particularly important for the safe operation of nuclear plants. Cascading failures after an event can sometimes be prevented-by isolating utilities, for example-which can reduce the number of fires that break out following the earthquake.

The world's only nationwide earthquake early warning system has been in operation in Japan since 2007. Regional early warning systems are up and running in Mexico, Turkey, Taiwan, Romania, and southern Italy. California has been developing a system of its own for years, testing it since January 2012 on the West Coast of the U.S. through a program called Shake Alert. The U.S. Geological Survey has just awarded USD 4 million to Shake Alert's developers to bring their EEW system closer to being operational.

The primary function of EEW systems is saving lives. The challenge is to get reliable systems operational in key locations before the next major earthquakes strike in their bailiwicks.