Is the South the New 'Tornado Alley'?

In 2011, a record was set for insured losses from severe thunderstorms. In all, more than USD 26 billion of losses left insurance companies wondering if they had underestimated nature's potential or-more importantly-if we were in the midst of a fundamental shift in the distribution of severe thunderstorm risk.

Of chief concern was a surge in activity in the southeastern states, far removed from the region traditionally known as "Tornado Alley." Has something changed that would force us to re-evaluate the distribution of severe thunderstorm risk across the United States?

While the most recent events in the southern states certainly grabbed people's attention, history tells us to be wary of making too much of short-term variability.

The problem that we all face is that the historical record of severe thunderstorms, and especially of rare events like tornadoes,is short and biased. Couple this with the large amounts of variability observed on a year-to-year and decade-to-decade basis and trend attribution quickly becomes a daunting task.

Let's examine the recent activity in tornado activity summarized in the map below. 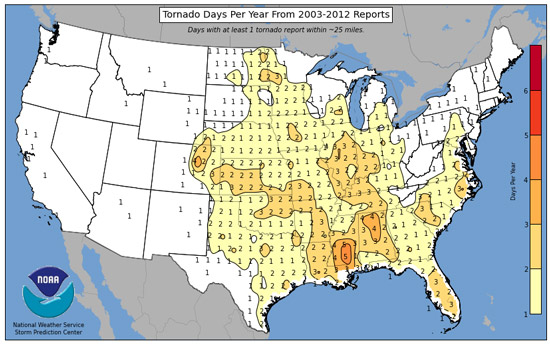 The total number of days that a tornado was reported between 2003 and 2012 within a 25-mile radius of the center of each of the boxes into which the country is divided (Source: Storm Prediction Center)

As you might expect, there is a significant amount of activity in the southern states, consistent with our recent experience there. In fact, if I were to draw a "Tornado Alley" on this map, it would almost certainly be centered on Alabama/Mississippi and trail off toward the middle of Oklahoma.

So why is Tornado Alley traditionally thought to be centered in the Great Plains? The answer becomes more apparent when we look further back into the record. The map below is the equivalent of the one above, except that it covers the time period 1950-1979, the very earliest part of the record. 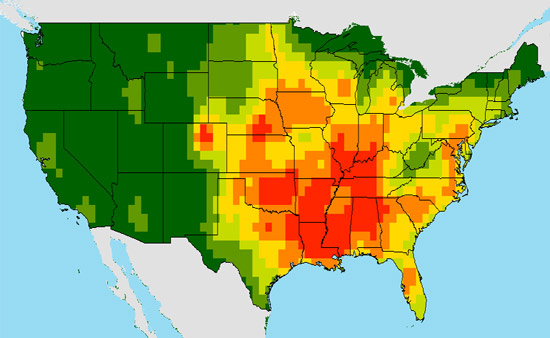 Suddenly the high levels of activity in the South are gone and are replaced with a peak in the middle of Oklahoma farm country.Actually, if you look closer, you will see that this maximum exists in both time periods charted here, but it is only the map for recent activity that highlights the Southeast.

These data inherently contain bias due to the fact that they are based on eyewitness reports, which inevitably fail to capture all events. However, it still seems clear that depending on the time frame you examine, there are distinct areas of activity that are also highly transient.

The truth of the matter is that we just don't know. To date, although research is ongoing, there is no reliable method for forecasting seasonal thunderstorm activity with the accuracy that the insurance industry needs. This is due to the highly complex,and often highly localized, features that affect convective storms.Companies like AIR try to take this into consideration when building catastrophe models. 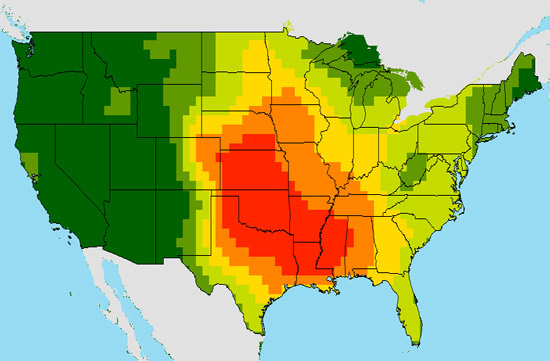 Looking at AIR's U.S. severe thunderstorm model released last year, the model's catalog is basically a blend of the two periods mentioned above. There is some elevated activity in the Southeast,some stretching into the Midwest, and a dominant maximum in central Oklahoma (one of the few areas highlighted in both historical records, above).

Will there be tornadoes in Oklahoma every year? Probably. Will we see another EF-5 in Tuscaloosa? Maybe.

About the only thing that can be said with any certainty about weather is that it will always be uncertain.