With Wind Vulnerability, Bigger Is Better...Up to a Point

Does the size of a home impact its vulnerability to hurricane winds? AIR researchers think so, and data confirm it.

Analysis of detailed company claims data for high-value homes from recent hurricane events show that building vulnerability (as characterized by a damage ratio, which is defined as the ratio of the repair cost to the replacement value) decreases with increasing gross area, or square footage. Plausible explanations for this inverse relationship include:

When we look at the vulnerability of buildings to externally applied loads, there are two parts to the equation: building resistance and the imposed loads. The reduction in vulnerability of large homes due to the resistance piece of the puzzle (first bullet point above) can be captured in the existing version of the AIR U.S. hurricane model through the input of appropriate secondary risk characteristics. More recently, however, AIR engineers have conducted a series of experiments using computation fluid dynamics (CFD) to understand the reduction in wind loads with increasing gross area when coupled with increased complexity in roof geometry.

The focus on roofs is a natural one. Post-hurricane damage surveys suggest that a significant driver of insurance claims is damage to roofs. This damage may be caused by overloading due to pressure, fatigue loading due to turbulence, or debris impact.

Data show that larger, high-value homes tend to have more complex footprints and roof geometries in comparison to their average-size counterparts. Idealized "virtual" buildings representing each type (average and high-value) were modeled. The added complexity of the larger, high-value homes was captured by changing the number of walls, corners, and the roof type (number of hip and gable ends). Our findings show that as the structural square footage and consequently complexity of the roof increases, the fraction of the total roof area that is subjected to damaging critical pressure coefficients decreases. This is because of flow modification due to the structural complexity (third bullet point above). 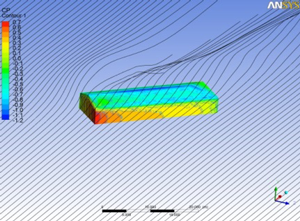 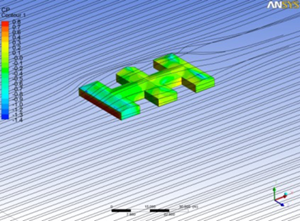 Two very different modeled building prototypes showing varying areas of the roof exceeding critical pressure thresholds. The model on the left is the typical average-size home (base case). The model on the right shows a representative configuration of a larger home and the accompanying complexity in its roof geometry.

Different negative pressure thresholds were established-not with the implication that these levels produce damage, but to signify that the portions of the roof with mean pressure coefficients beyond these thresholds are probably areas where failures of roof covering, components, or sections are most likely to occur. 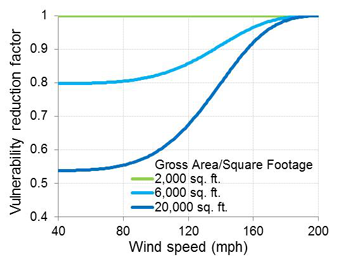 Findings from this research have been used to inform AIR's U.S.hurricane model update scheduled for release this summer in Touchstone® 3.0. It should be noted that this methodology captures the reduction in the vulnerability of high-value homes purely from the standpoint of external pressures or loads. The reduction in vulnerability due to the presence of superior features should still be captured by inputting those secondary risk characteristics directly into Touchstone.

If you would like to know more about computational fluid dynamics, read our AIR Current, Where the Wild Winds Blow, Part I