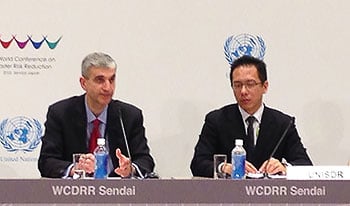 AIR has teamed up with the United Nations Office for Disaster Risk Reduction (UNISDR) to investigate whether the perception of the increasing economic cost of disaster events is real. That is, is our world really becoming more dangerous?

Dr. Milan Simic, Senior Vice President and Managing Director of International Operations at AIR, will discuss the initial findings of our study at the Third United Nations World Conference on Disaster Risk Reduction (WCDRR) in Sendai, Japan, on March 17, 2015. The conference brings together delegates from around the globe to review the Hyogo Framework for Action established in 2005 to build the resilience of nations and communities to disasters.

The preliminary messages from our work for UNISDR will be incorporated into the knowledge base that informs the post-2015 framework for disaster risk reduction. AIR's contribution will better quantify the trends in the true economic cost of natural disasters so that countries are in a better position to manage disaster risk.

Global society has long been influenced by natural hazards, but as populations continue to grow in areas of high hazard, losses will continue to increase. Not a week goes by without the media reporting the harrowing reality of disasters, and this has contributed to a greater awareness of the increasing human and economic costs.

The insurance industry has also noted an increase in the cost of disasters. Taken at face value, these increasing losses present new challenges for disaster-risk management. However, disaster risk is driven by a plethora of factors, including population, wealth,land-use, and demographics. Add into the mix natural variability in the frequency and severity of events, anthropogenic climate change,and the implementation of resilience policies, and it becomes clear that disaster-risk management is a complex and challenging field.

Using publicly available economic loss estimates from the insurance industry (Swiss Re and Munich Re) for the period 1980-2013, we investigated the economic cost of past disaster events if they were to occur today.

Preliminary results focus on economic loss data for natural hazards reported for the period 1995-2013 by Swiss Re in their annual Sigma report series. Unnormalised data, that is,the economic cost of an event as reported in the year that it occurred, exhibit a statistically significant upward trend overtime, as the graph below clearly shows. 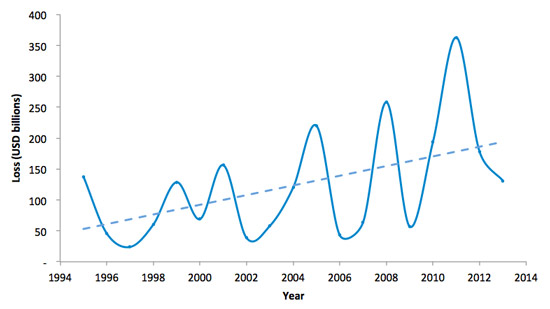 However, as discussed, factors such as population and wealth have risen over the past two decades and inflation, too, has had its impact on losses. These must be corrected for, or "normalised,"if we are to compare past and more recent disasters on alike-for-like basis. Inflation and gross domestic product (GDP)data from sources such as the World Bank are typically used to normalise economic losses. 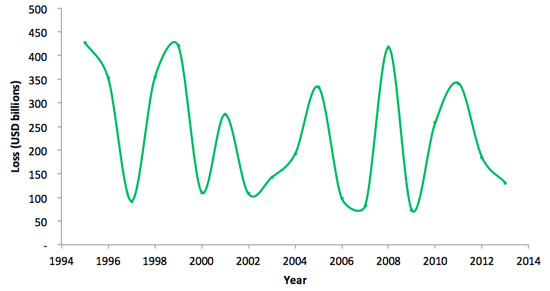 After normalisation, annual economic losses from natural hazards on a global scale exhibit no significant trend through time. Future work will investigate whether any trends exist in the normalised data set for specific perils and regions, with a particular focus on developing nations.

To learn more about AIR's initial findings from this study,please watch the video of the AIR/UNISDR presentation:

Foran overview of these findings, see our infographic.