How Often Does Florida Experience a Hurricane Drought? 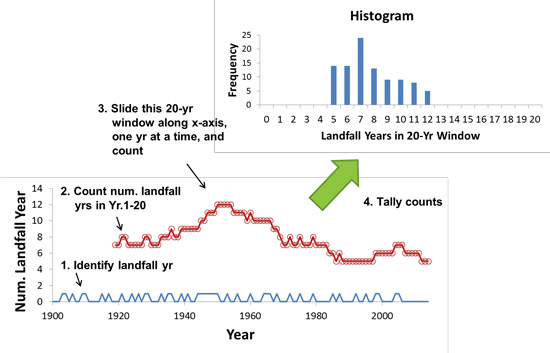 We've seen five hit years over the last 20 (last red dot on the right in Figure 1). How often have we seen a frequency like this in the historical catalog? The answer is 14 (first blue bar in the Figure 1 histogram), or roughly 15 out of 100 times (or 0.15). But what about the stochastic catalog? The frequency of such a state in our 50K stochastic catalog is seven out of 100 times (or 0.07). That is on the low side comparatively, but not entirely unlikely since it is within the 95% confidence level. The frequency of having 14 landfall years out of a 50-year stretch (again, the current state) is 0.02 in the historical catalog. It is also 0.02 in the stochastic catalog.

Many periods with distributions similar to the historical data can be found in AIR's stochastic catalog. We can compare these periods with those found in AIR's historical catalog by employing the Spearman's rank correlation technique (a coefficient used to discover the strength of a link between two sets of data). For distributions generated using 20-year window, 25% of the total cases generated from the stochastic catalog have the Spearman rank correlation of better than 0.89 against the historical catalog. For those generated using 50-year window, 25% of them have the correlation of better than 0.77.

Figure 2 visualizes such similarity. Using a 20-year window, the distribution generated from the historical catalog (blue bars in left plot) is unimodal (also seen in Figure 1), and we can see that a period in AIR's stochastic catalog produces similar distribution (red bars in left plot). Using a 50-year window, an interesting bimodal distribution is found in the historical catalog (blue bars in right plot). More interestingly, such a signal is well-captured in a sample from our stochastic catalog (red bars in right plot).

To summarize, the hotly-debated hurricane frequency pattern over the past few decades is reproducible using the AIR stochastic catalog.

Note that in AIR's U.S. hurricane model, the number of landfalls for simulated storms in a year is generated from a negative binomial distribution with certain additional constraints applied. This process is called constrained Monte Carlo sampling. The current AIR model assumes that there is no dependence from one year to another; in other words, every year in the catalog has an equal probability of occurrence. As a result of this independence assumption, stretches of years with hurricane landfalls or stretches with landfall droughts are not explicitly modeled; instead, inter-annual variability is intrinsically controlled by the negative binomial distribution and constrained Monte Carlo sampling.