In size and population, Brazil is the fifth largest country in the world. Its principal natural hazard, flood, has for the most part occurred historically in areas where exposure values and insurance penetration are low. Nevertheless floods cause economic losses of about USD 1.4 billion annually, according to sources cited by Axco Insurance Services.

The last decade and a half have seen weather patterns deliver increasingly extreme and destructive events. At the same time the population has become more concentrated in urban areas, and Brazil's economy has grown significantly-it is now the world's seventh largest.

Riverine and flash floods are common, and heavy rainfall is the principal cause. The rainy season (December to April) often leads to major flooding, which can be exacerbated during El Niño. Both the intensity and frequency of severe precipitation are thought likely to increase as a result of climate change. 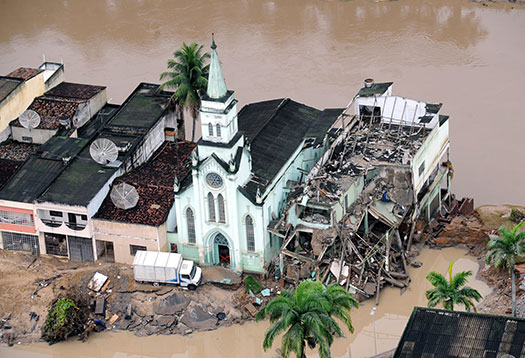 When floods occurred in Palmares, Pernambuco, in 2010 the church was one of the few buildings that escaped destruction. (Source: Agência Brasil)

More than two thirds of the Amazon basin, the most extensive river system in the world, lies in Brazil, but the major urban areas in the southeastern portion of the country-and the concentration of exposure they represent-are actually the areas especially at risk for devastating floods. Brazil's second longest river, and one of its most important in economic terms, is the Paraná River. Its basin serves some of Brazil's most important cities, including São Paulo and Brasilia, and almost a third of its population.

With effective flood risk management becoming one of the top concerns in the re/insurance industry, AIR has continued to expand its suite of flood hazard maps to include inland flood hazard maps for Brazil. These use the same underlying flood mapping methodology that is available in AIR's fully probabilistic inland flood models and capture all sources of riverine flooding.

The hazard maps capture inland flood hazard for the seven river basins that affect Brazil-a modeled river network that drains an area of approximately 12.2 million km2 (including areas outside the country that drain into Brazilian basins)-and incorporate the physical properties of Brazil's terrain along with a thorough analysis of the frequency of flooding.

The maps are available through the Geospatial Analytics Module of Touchstone Version 3.0, and can be used for effective management of loss accumulations, for determining whether a risk meets underwriting guidelines, and for developing effective portfolio management and risk transfer strategies. For more information see AIR Probabilistic Flood Hazard Maps in Touchstone.