Flood Re: A New Way to Manage UK Flood Risk

Insuring high risk properties is a thorny issue in many regions and different countries have their own ways of dealing with it. In the U.S., FEMA recommends mitigation measures for homes built in high risk zones; elevating them on stilts is one example. But in some countries, high risk homes, such as those located in Zürs Zone 4 in Germany, cannot get any flood insurance at all. The problem will likely be exacerbated by climate change.

The infographic below addresses potential impacts of climate change on flood risk in the UK. AIR, the Met Office, and the Association of British Insurers estimate 200-year return period losses could increase by a third with a 4° C increase in global surface temperature. While any such rise in temperature will take some decades to realize, the number of flood events hitting the headlines in recent times has brought the issue of flood insurance to the fore now. 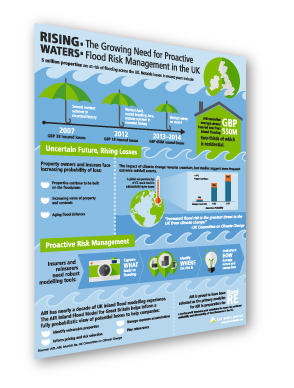 For many years insurance companies in the UK had an agreement with the government whereby insurers would offer flood coverage for the most at-risk homes while the government in return committed to spending on flood defences. This compromise reassured insurers that efforts were being made to mitigate increasing flood risk.

The agreement, or "Statement of Principles" as it was called, has now come to an end and it is being replaced by Flood Re, a not-for-profit insurance pool set up to ensure that flood insurance remains available and affordable.

Insurance pools often rely on the principle of solidarity where less risky properties subsidize the premiums of more risky ones. Most pools worldwide, such as the Turkish Catastrophe Insurance Pool (TCIP), cover properties in both risky and non-risky areas. But in Flood Re, only properties deemed at high risk of flooding are ceded to the pool. Nevertheless, Flood Re is still funded through levies on all policyholders rather than just those at risk (along with other means of funding such as levies on insurers).

AIR has worked on UK flood risk for nearly a decade and released the AIR Inland Flood Model for Great Britain in 2008. What we have found is that flood risk here is very concentrated, with 30% of the average annual residential inland flood loss coming from just 2% of post codes.

Despite this, flood risk in the UK is rarely explicitly priced for, and insurers still have some way to go in quantifying the risk and incorporating it into pricing and risk selection. Flood extent maps that do not address loss quantification (that is, the vulnerability and replacement values of exposed properties) or the short historical record are often all that is used to inform risk selection and pricing.

With the advent of Flood Re it is hoped that the UK flood insurance market will move toward the use of catastrophe models to quantify the risk, inform pricing, and determine which properties should be ceded to the pool.