Will Scientists Ever Be Able to Predict Earthquakes? 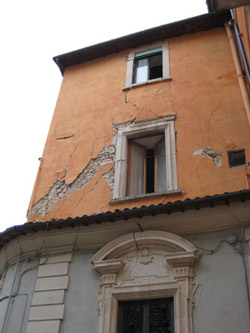 Severe cracks compromise the structural integrity of this wall after the 2009 L'Aquila earthquake (Source: AIR)

At one time or another, fleeing toads, magnetic waves, thermal radiation, planetary alignments, tidal forces and disruptions in the ionosphere have all been said to foretell earthquakes. Ask most geoscientists to predict an earthquake, however, and they will scoff at the notion.

Therefore, it was a shock to the scientific community and the world when, in 2012, seven scientists in Italy were convicted of manslaughter and causing bodily harm for giving "inexact, incomplete, and contradictory information" about whether small tremors felt by residents of L'Aquila, Italy, prior to the 2009 Mw6.3 earthquake should have been grounds for a warning.

The convictions were recently overturned1 by an Italian appeals court, but the incident raises two questions: why can't scientists predict earthquakes, and will they ever be able to?

To be useful, an earthquake prediction needs a location along a fault and a specific time (and sometimes a rupture magnitude), each of which presents challenges to shake seers. Large magnitude quakes, which typically cause the worst damage and highest loss of life, occur rarely and information about them is therefore sparse. Although significant advances have been made during recent decades about detecting the location of locked sections of active faults and subduction zones, significant uncertainties still exist regarding the timing of earthquakes and the associated magnitude-not to mention the location and geometry of unmapped,hidden faults.

While significant foreshocks precede some large earthquakes (like the recent Iquique earthquake in Chile), many (like the quake that rattled California's Napa Valley in 2014) strike without warning. So far, no one has succeeded in repeatedly getting these variables right before an earthquake strikes.

This isn't to say earthquake prediction hasn't been tried. The most notable (and successful!) attempt was made during the 1975 Haicheng Earthquake in northeastern China, where a successful forecast and subsequent city-wide evacuation ordered just before the February 4, M7.3 earthquake saved countless lives. Another notable attempt happened in the United States during the 1980s when a panel of 12 scientists, formally known as the National Earthquake Prediction Evaluation Council, announced that there was a 95% chance that an M6 earthquake would occur along the Parkfield section of the San Andreas Fault by 1993. There seemed to be good evidence for the prediction: six previous earthquakes had occurred in a rather regular fashion in 1857, 1881, 1901, 1922,1934, and 1966 and all had a similar corresponding magnitude (6).Unfortunately (for the Council), the predicted earthquake came a little late…in 2004.

While the terms earthquake prediction and earthquake forecasting are often used interchangeably, there are subtle differences. The use of the quantitative and technically correct term "forecasting" is really more acceptable than the phenomenon-specific" prediction."

Today, geoscientists favor earthquake forecasting instead of short-term, Iben Browning  (New Madrid) style predictions. These "seismic weather forecasts", as one researcher describes them, would estimate the probability of an earthquake, much as meteorologists forecast precipitation amounts at a certain time and location, but would be less accurate than a weather forecast. For example, scientists could warn the public that the baseline probability of an earthquake has risen from 0.01% to 1%.

Meanwhile, some scientists feel that even if the technical challenges of foretelling earthquakes are overcome, an inaccurate earthquake prophecy could be worse than none at all. If the anticipated earthquake doesn't happen it could be seen as crying wolf-and could be very costly if evacuations are ordered.

Everyone can agree that if imminent earthquakes can be accurately identified in advance, it won't be anytime soon. Until then the best that scientists and the public can hope for is improved earthquake forecasting, and to reduce damage and loss of life from catastrophic events, including earthquakes, by increasing awareness, preparation, and resiliency.

1 The court did uphold a guilty verdict against a civil protection agency official regarding statements he made and issued a suspended two-year sentence.