The 2014 Hurricane Season in Review

In 2014, tropical cyclone activity in the Atlantic was almost diametrically opposed to activity in the East and Central Pacific basins. Florida's record-setting hurricane "drought" stretched into its ninth year, while the East and Central Pacific basins had the second most active season since 1949. A strong El Niño was forecast early in the season, but after an initial surge, El Niño conditions faded and have still not fully developed. (As of December 4, the National Weather Service projected a 65% chance of El Niño conditions in the Northern Hemisphere during winter and into spring.) Yet conditions in both basins resembled those that occur during an El Niño.

In the Atlantic, Hurricane Arthur was the only storm to make landfall in the United States. The Category 2 storm caused only minor damage in North Carolina, as the most damaging winds remained off the coast. Bermuda didn't fare as well this year. The small island was hit by Hurricanes Fay and Gonzalo in quick succession. Both storms knocked down trees and utility poles, leaving much of the island without power. Gonzalo hit Bermuda as a Category 3 storm, and was the first storm in the Atlantic to reach Category 4 status since Ophelia in 2011. Hurricane Edouard, a Category 3 storm, was the first major hurricane in the Atlantic since Sandy hit Cuba in 2012, but it stayed well out to sea. 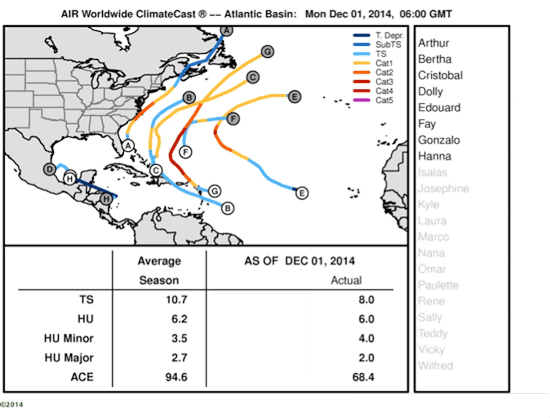 Tropical cyclone names and tracks and average season storm counts in the Atlantic basin for 2014. While the Atlantic hurricane season officially ended December 1, additional systems could form in the coming weeks and change these numbers.
(Source: AIR Worldwide ClimateCast®)

What was behind the low activity in the Atlantic? Warmer than average water temperatures encouraged some tropical cyclone formation, but strong vertical wind shear, increased atmospheric stability, high pressure, and drier air across the tropical Atlantic inhibited activity across the basin. Of particular interest, few easterly waves developed in 2014 as well. These low-level winds are the seeds for tropical cyclone development-about 60% of all tropical storms and 85% of all major hurricanes in the Atlantic begin as easterly waves. Yet for much of the year, the easterly waves were much weaker than normal. Why this happened is a matter of speculation, but it did contribute to the unusually low level of tropical cyclone development in the eastern Atlantic.

Hurricanes Amanda and Christina both reached Category 4 status, the first time since the beginning of the satellite era in 1966 that two Category 4 hurricanes formed in June. In September Hurricane Odile, which was the most intense hurricane to make landfall on the Baja peninsula in the satellite era, devastated the Mexican resort city of Cabo San Lucas. Odile is close to a worst-case scenario: a very strong storm (Category 3 at landfall) in the middle of the hurricane season that came in just west of the high value exposure in Cabo San Lucas.

Farther west, several hurricanes threatened Hawaii, a rare occurrence due to Hawaii's small size. Hurricane Iselle was the first tropical cyclone to make landfall on the Big Island since 1958. Hurricane Julio initially threatened Hawaii, but later veered away. Hurricane Ana passed south of Hawaii, producing heavy rainfall on the Big Island but little to no damage. For more on Hawaii hurricane risk, take a look at this AIR Currents article.

For a more comprehensive review of this year's hurricane season in the Atlantic and East and Central Pacific basins, including additional historical context and industry significance, please watch a recording of our recent webinar.