The Most Comprehensive Assessment of Climate Change Ever Undertaken 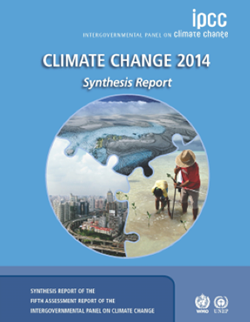 The fifth Assessment Report of the Intergovernmental Panel on Climate Change (IPCC) was released on November 1. It is a formal synthesis of findings from various working groups and previously published special reports-some of which have been available for more than a year. As such, AR5, as it is known, does not contain much new or surprising detail to enhance the global climate change picture. It does, however, solidify the consensus that has been developing for several decades: climate change is occurring, and anthropogenic (human-induced) greenhouse gas emissions are a serious contributing factor.

While the AR5 messaging is more direct and confidently stated than in past reports, this in and of itself is not really newsworthy. The most interesting aspect of the report, in my opinion, is the evolution of the discussion of impacts beyond global temperatures.

For example, there is much uncertainty on impacts on precipitation patterns and how these might affect the frequency and severity of major flooding events. Likewise, changes in jet stream patterns, availability of humidity, and atmospheric stability interact in chaotic ways, making it difficult to anticipate how phenomena such as severe thunderstorms and hurricanes may be affected.

To better prepare for the future risk from natural catastrophes, we need first to recognize the uncertainties so that we can better appreciate the range of potential outcomes. The AR5 report provides good background about what we do and don't know in this regard.

Another interesting discussion revolves around event attribution. That is, what do we need to be able to say with any confidence that a given climatic event (e.g., a heat wave,flood, tropical cyclone, etc.) has been influenced in some way by climate change?

While the news media seems to attribute every new natural catastrophe to climate change, it turns out that proving an actual link is more difficult than it may sound. Building off information from previous reports, AR5 sets some important benchmarks for making such assessments based on climate science.Factors related to heat waves and sea level rise, for example, are the most directly attributable to a changing climate.

Lastly, AR5 provides some sobering details regarding the choices we face as a society going forward. The majority of greenhouse gas emissions are related to energy production and economic growth-and these emissions must be reduced if we are to mitigate warming trends, however difficult this may be to achieve. Furthermore, increasing population and wealth mean that society is more vulnerable to climate change due to changing exposure. Volatility in food production is likely, for example, as are increases in disease.

To my mind, integrating the diverse knowledge sets related to these types of issues is where the IPCC reports continue to provide the greatest value. The scientific consensus today is that global warming is real, but that doesn't mean that we have all the answers. There is still a lot we don't know about the impacts of global warming and the most effective means of mitigation and adaptation. IPCC reports may not be generating news stories so often these days, but in synthesizing the findings of thousands of papers and providing a clear and up-to-date view of the current state of scientific knowledge relevant to climate change, the IPCC's work continues to be both important and relevant.