AIR is developing worldwide flood hazard maps for markets where it is not yet possible to create fully probabilistic flood models (as we've done for the U.S., the UK, and Germany). These maps provide a view of the extent of the flooding associated with river flow magnitudes at the 100-, 250-, and 500-year return periods (1%,0.4%, and 0.2% annual exceedance probabilities) and can be imported as hazard layers into Touchstone® to facilitate efficient accumulations management and underwriting decisions. The first two, released earlier this year, are for Thailand and China.

Elevation data is one of the most important aspects of assessing flood risk because both flood extent and depth are determined by it. For some countries, including the aforementioned U.S., UK, and Germany, high resolution Digital Terrain Models (DTMs) are readily available. But neither China nor Thailand has any publically available DTMs at the country or river basin scale.

While the ASTER DEM might seem the obvious choice because of its higher resolution, that's not the only consideration when selecting an elevation dataset. Elevation accuracy is also very important.

Because ASTER DEM uses overlapping pairs of satellite images to estimate elevation, atmospheric interference, clouds, sun angle, and other variables can introduce error into the estimates. The SRTM dataset was generated using a synthetic aperture radar (SAR) system mounted on the Space Shuttle Endeavor, and it does not suffer from these limitations; thus it can provide better estimates of the actual elevation.

Let's take a look at the Bangkok area to better understand the differences between ASTER and SRTM. 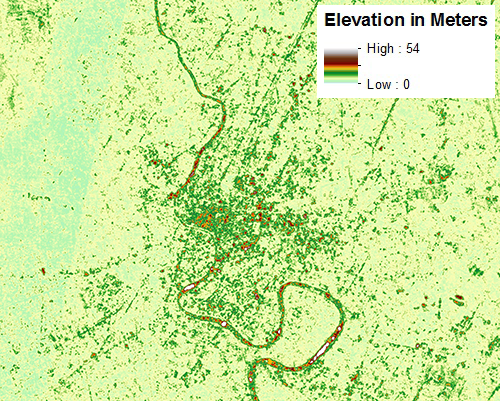 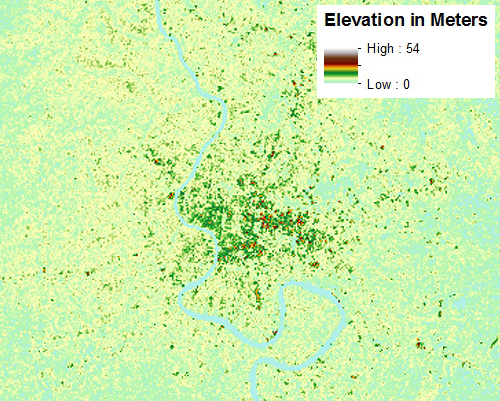 Bangkok is situated in the Chao Phraya River delta in Central Thailand. The land is flat and low-lying, with an average elevation of 1.5 meters (4 ft 11 in) above sea level. Much of the area was swamp before it was drained for agriculture, and city that occupies it today is slowly sinking.

In addition to the improved estimation of water feature elevations, the amount of inter pixel elevation variability or "noise" is much lower with SRTM than ASTER. The two graphs below show how much variability there is in the ASTER elevation data, compared with the relatively smooth SRTM elevation data. Furthermore, we can see that ASTER includes the elevations of buildings in its elevation estimates. While SRTM also includes some information on building heights, the magnitude of impact on the elevation estimate is much lower than for ASTER. 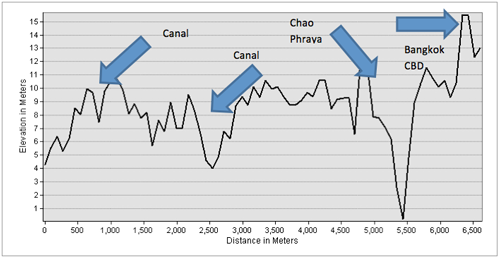 As AIR continues to expand the geographic coverage of its flood models, we will continue to seek out the best elevation datasets for inclusion into our models-and into our flood hazard maps. While it's tempting to opt for the highest resolution elevation data, it is even more important to make sure that the data accurately represents all aspects of the terrain to be modeled.

For more information on AIR's flood hazard maps for China and Thailand, read the solutions brief.