Big earthquakes (or mainshocks, as seismologists call them) get lots of attention, and with good reason: they happen suddenly, often without warning; they almost invariably cause the greatest damage and the greatest loss of life; and by definition they have the largest magnitude. However, aftershocks- smaller earthquakes that occur after the main quake-can also be quite strong and generate significant losses that can, in rare cases, exceed those of the main quake. 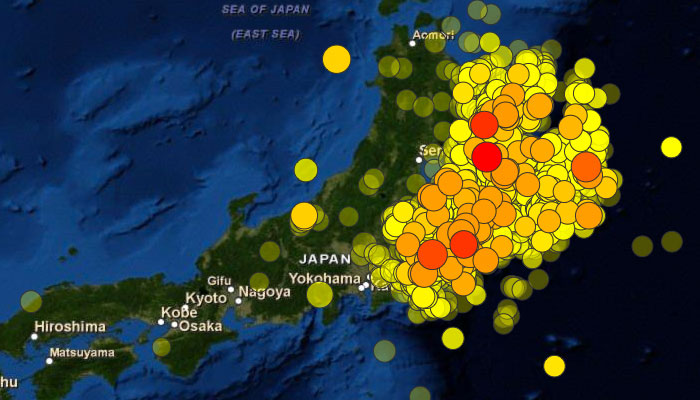 Take the 2010-2011 New Zealand earthquakes, for example. On September 4, 2010, a M7.1 earthquake rattled the city of Christchurch. Its epicenter was 45km (30mi) west of the city. No lives were lost and few serious injuries were reported. But nearly six months later, on February 22, 2011, a M6.3 earthquake ruptured just 6 km (3 mi) from Christchurch and violently shook the city. Damage was widespread: 185 people were killed and nearly a third of the buildings in Christchurch's central business district were damaged beyond repair. Some scientists consider the February 22, 2011 earthquake the largest aftershock of the 2010 mainshock.

From a seismological point of view earthquakes occur due to regional or local stress build up and the release of that stress. Aftershocks occur within and near the periphery of the mainshock rupture area (typically within one or two rupture lengths), as did the 2011 Christchurch earthquake. Big earthquakes can also trigger damaging earthquakes on faults up to tens of kilometers away. In that sense aftershocks and triggered events are all promoted by the stress perturbation of the mainshock. Events like the Centenary 2010 - Christchurch 2011 events in New Zealand and the Landers -Big Bear 1992 California earthquakes are cases where an earthquake triggered another earthquake on a separate nearby fault. Although most mainshocks have aftershocks, not all mainshocks will trigger earthquakes on nearby faults in a short period of time.

AIR implicitly includes aftershock damage in our modeled loss estimates, but to explicitly model aftershocks in a practical and efficient manner several significant technological and logistical challenges need to be overcome.

Here's some of what we know:

Much of this information is codified in three well-established empirical laws, known as the Omori, Bath, and Gutenberg-Richter laws.

During the generation of a catalog of simulated earthquakes, AIR declusters the catalog of historical events, separating them into foreshocks, mainshocks, and aftershocks. Foreshocks and aftershocks, along with their mainshock, are represented as a single "equivalent earthquake" of slightly larger magnitude encompassing the full energy of the cluster. AIR then validates the expected damage from some large quakes with actual damage claims-claims that include damage from aftershocks.

Implicitly including aftershock damage gives an estimate of total loss for the overwhelming majority of earthquakes. It is true that explicitly modeling aftershocks would increase the accuracy of these estimates. But, as aftershock damage typically accounts for only a small percentage of the total loss, the increase wouldn't significantly change damage estimates-and the explicit inclusion of aftershocks would come at significant cost in terms of model run times.

For example, AIR's 10,000 year stochastic catalog for New Zealand contains nearly 200,000 earthquakes of M5 or greater. Although the energy of aftershocks is implicitly included in the current event generation process, one could generate a stochastic catalog containing mainshocks, each having the potential, given its magnitude, to cause at least a few minor aftershocks, but in some cases there could be dozens, even hundreds, of aftershocks, many of which would have to be modeled.

Then there is the problem of memory. To accurately access aftershock damage would require the model to remember the damage caused by the first earthquake, and then assess additional damage from aftershocks on already damaged buildings-a task that would necessitate a whole new set of damage functions.

Despite these challenges and others, AIR is looking at modeling aftershocks to further improve our damage estimates, and will continue to work with our clients to discuss the best approaches to modeling them.