What on Earth Is a Dropsonde?

Successful hurricane forecasting requires a clear understanding of what is going on inside a tropical cyclone system and the various forces driving its development. Detailed and accurate data about wind speeds, air pressure, humidity, sea surface temperatures, and a host of other factors are needed to build this picture. Given that the center of a hurricane is not a good place to be, how on earth do forecasters get this information?

The data are gathered from multiple sources, including satellites, ships, weather buoys, land-based weather stations, and reconnaissance aircraft. The National Aeronautics and Space Administration (NASA) uses some of its aircraft to study hurricanes, but most hurricane reconnaissance missions are flown  by the National Oceanographic and Atmospheric Administration (NOAA) and the 53rd Weather Reconnaissance Squadron of the U.S. Air Force Reserve-better-known simply as the Hurricane Hunters.

The aircraft flown by these organizations are loaded with instrumentation-including in some cases, Doppler radar. And while some of them fly at higher altitudes, the Hurricane Hunter and NOAA aircraft generally fly through the storm systems at around 10,000 feet (3,000 meters) and experience extreme turbulence in hurricane rain bands and eye walls. There is a limit to what these planes can safely endure and the information that the instruments carried on them can collect. To gather additional data, scientists need something that can get even more up close and personal with hurricanes. 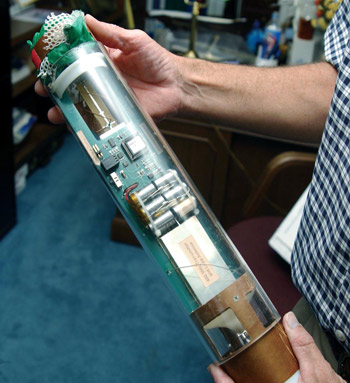 A NOAA technician prepares to eject a dropsonde via the pressurized sono chute on the floor (Source: NOAA)

The answer is to use disposable probes. "Sonde" is the French and German word for probe, and various types are used for gathering meteorological data. Radiosondes, for example, are carried up into the atmosphere by weather balloons to measure and transmit various atmospheric parameters, and a variant called a rawinsonde ("radarwind-sonde") provides wind speed and direction as it ascends.

Drop sondes are radiosondes that are designed to be dropped down,rather than float up. They are cylindrical packages of instruments deployed from reconnaissance aircraft every 241.4 km (150 miles) or so, usually close to the eye of the hurricane. They descend on a parachute to the surface of the sea and, as a result, typical drops last from three to five minutes.

During this time the instruments gather information continually and transmit it back to the aircraft twice per second. The coded data include the drop's date and time (in UTC) and its location(latitude, longitude, and Marsden Square mapping). Temperature,dew point depression, wind speed, wind direction at the surface, and where specific air pressures are encountered are also transmitted along with the device's altitude.

In its short journey each drop sonde transmits a vertical profile of the atmosphere's temperature, humidity, barometric pressure, and wind data. Many drop sondes are used every year to gather the data that hurricane scientists and forecasters need. Hurricane Hunter aircraft of the 53rd Weather Reconnaissance Squadron, for example,typically use between 1,000 and 1,500 sondes annually on training and storm missions.

Information from the many drop sondes deployed on each mission is used to build a picture of hurricane conditions as they develop.Without drop sondes, where would we be?