My London colleague Tristan Lloyd blogged recently about the UK-based Earthquake Engineering Field Investigation Team (EEFIT), which was then busy initiating its response to the April 25 earthquake near Gorkha inNepal. EEFIT sent observers to the region to observe earthquake damage and collect data so they could report findings to the wider engineering community.

The team, of which I was a member, consisted of 10 seismologists, geologists, and geotechnical and structural engineers. Our goal was to spend six days conducting field investigations and meet with key individuals, including national and international authorities. With such a wide area of devastation to survey, the field investigation team divided at times into small groups to cover more locations.

Visits were made to the town of Chautara about 80 km northwest of Kathmandu; Gorkha, close to the epicenter of the event; the village of Shankhu; the UNESCO World Heritage Site of Bhaktapur; and to several areas in and around Kathmandu itself. In addition, two members of the team flew with the United Nations to survey a remote hilltop village which had yet to be visited by land-based transport. 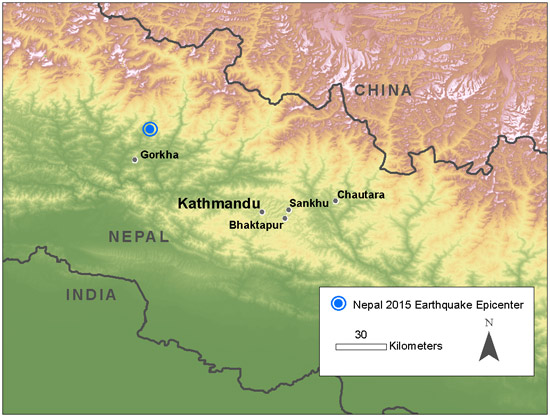 Map showing the epicenter of the earthquake and the region visited(Source: AIR)

The nature and extent of the damage encountered varied considerably. A common theme was the structural failure and collapse of residential property built of unreinforced stone masonry with clay/cement mortar-building materials common in rural areas and the older parts of towns. 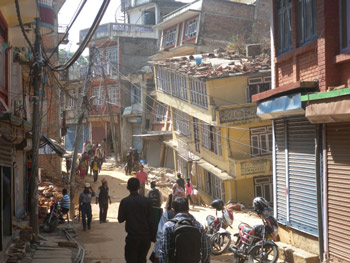 Damage from the April 25 earthquake in Nepal (Source: AIR)

In Chautara we encountered extensive damage to concrete framed structures that was attributable to the failure of the structure's foundations or of the sloped terrain on which they stood. And in a few areas of Kathmandu many mid-rise (3 to 5 stories) concrete framed buildings were damaged as a result of soft story or foundation failure. But in Bhaktapur structures with concrete frames and brick infill seem to have fared comparatively well.Damage was evident, however, at several of the historic temples within the World Heritage Site at Bhaktapur, some of which had experienced total collapse.

The EEFIT team met with officials from a variety of organizations, the first of which was the Director of the Nationa Society for Earthquake Technology-Nepal (NSET) School Earthquake Safety Program. (I am proud to note that NSET is, in part, the creation of GeoHazards International, an organization on whose Board AIR's president Ming Lee sits.) NSET has retrofitted 200 schools in and around Kathmandu in recent years and, remarkably,199 of these experienced no damage in the April event;unfortunately, the same cannot be said of schools that had not undergone retrofitting.

The team also met with officials from the National Engineering Association, which has rallied 3,500 volunteers with engineering knowledge to provide visual assessment services for building owners who desire a technical opinion. Other visits were paid to the British Ambassador to Nepal, the World Bank team in Nepal, and the National Seismology center at Nepal's Department of Geology.

Finally, we met with Dip Panday, CEO of the Shikhar Insuranceco. Ltd., to ascertain the potential impact of this earthquake on the insurance industry. In Nepal, where earthquake insurance is covered under fire policies, penetration is low and exposure is largely underinsured. Indeed, what penetration is present is mostly there because coverage is required by banks when making loans. The balance sheets of a few insurance companies will suffer as they do not have adequate reinsurance, but the overall impact of the April event on the Nepalese insurance industry will likely be minimal.

Stay tuned for a more in-depth look at the damage survey findings in the upcoming July issue of AIR Currents.