Could Boston Be the Next Christchurch?

I'm a Bostonian who has visited New Zealand often and noticed many similarities between Christchurch and my hometown. There are definitely concerns about Boston's seismic risks. The other day,some colleagues and I presented findings from a study undertaken for the City of Boston at the Annual Meeting of the Earthquake Engineering Research Institute, themed "Old Cities, New Earthquakes."

What happened in Christchurch was a wake-up call because the region was thought to have little seismic activity. But in 2010 and 2011 it was hit by a swarm of earthquakes that occurred on previously unknown faults. Because Christchurch has so many unreinforced masonry buildings (and/or buildings with insufficient detailing), and because so much of the city is built on loose sand and silt deposits, there was an unprecedented amount of damage from liquefaction. And because the area was perceived to have low seismicity, the impacts of the earthquakes were exacerbated by alack of preparedness.

Boston's circumstances are broadly similar. It is one of the oldest cities in the United States, and more than 50% of its housing units were built before 1940. Commercial buildings, on the other hand, saw a major surge of new construction after World War II, with more than 25 million square feet added between 1960 and 1998. Most of these buildings were constructed when there were no seismic provisions or requirements in the local building code.

Boston is perceived as having low seismicity due to the infrequency of historical events, but earthquakes do occur here. There have been small magnitude earthquakes in 1744, 1817, and 1846 just 10 to 15 miles from downtown Boston, for example. And there was an M 5.9 event in 1755, centered about 40 miles away off the coast of Cape Ann-the largest earthquake in the region's history. 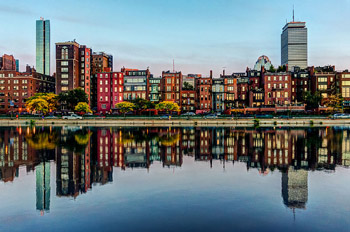 After the Cape Ann earthquake Boston expanded enormously, particularly in the nineteenth century when much of the bay area was artificially filled and covered with Boston's characteristic brownstone buildings. These handsome, high-value unreinforced masonry properties typically have many vulnerable features, such as high ceilings and tall unreinforced chimneys.

This combination of seismic activity, however infrequent, and unreinforced masonry and/or insufficiently detailed buildings constructed on artificial fill is primarily what places Boston at risk.

While the impact of liquefaction is likely to be considerable(although not as severe as was observed in Christchurch), it might still result in significant lifeline and infrastructural damage.Considerable casualties and economic losses can occur as a result of damage to buildings like the brownstones, but appropriate mitigation measures are both feasible and cost effective. If Boston wants to avoid being the next Christchurch, it needs to get serious about raising awareness and improving preparedness.