Sea levels are rising inexorably, yet people around the world continue to flock to areas at risk of coastal flooding and to build on them. Over time, storm surge has proven to be an important driver of insured losses. But in the mid-19th century, when he was the first to recognize the threat posed by this hazard, Henry Piddington faced an uphill battle convincing others.

In the early 1850s the capital of West Bengal, Calcutta (present-day Kolkata), was also the capital for all British-held territories in India. Its Hooghly River, however, seemed to be silting up, and it was feared that the port might become unusable.

An urgent search for an alternative facility ended when a location 45 km to the southeast on a wide stretch of the River Malta was chosen for development. An impressive new port city was to be built to rival Bombay (present-day Mumbai) and Singapore and be the new capital of British India. It was named after the Governor General in office during its development, Lord Canning. 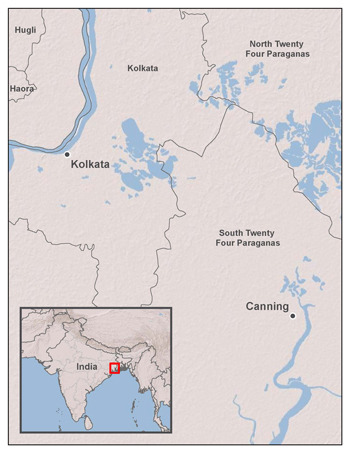 Kolkata and Canning in West Bengal, close to the Indian border with Bangladesh. (Source: AIR)

The Hero of the Story

Henry Piddington, a former captain in the merchant marine, settled in Kolkata in 1820 and took a keen interest in scientific matters. In the late 1830s he began to study great storms at sea and ultimately published 40 memoirs and books on the subject—it was Piddington who coined the term "cyclone" to describe these storms.

He was also one of the early pioneers of gathering storm data and the development of storm warnings, but in the words of biographer A. K. Sen Sarma, "His abiding contribution was to the appreciation of tropical cyclones as a natural hazard of titanic impact on land." He realized that the destruction wreaked by a cyclone ashore is often largely due to "storm wave," as surge was known at the time, and he worked with missionary zeal to get others to understand the risk.

In 1853, for example, when he learned of the plans to develop Port Canning, Piddington wrote an open letter to the administration urging a halt to the project. Knowing both the hazard and the area, he predicted that if construction went ahead the new port would be drowned by cyclones. Specifically he warned that, "Everyone and everything must be prepared to see a day when, in the midst of the horrors of a hurricane, they will find a terrific mass of saltwater rolling in, or rising up upon them, with such rapidity that the whole settlement will be inundated to a depth of from five to fifteen feet (1.5-4.5m)."

Despite his knowledge and good intentions, Piddington was unable to stop the development, and the devastation he predicted duly occurred. Exactly 148 years ago, on November 2, 1867 (nine years after Piddington's death), a cyclone hit the region. Kolkata, although suffering extensive wind damage, escaped added destruction from storm surge. Port Canning, however, was totally destroyed by a surge "about five feet and a half high," according to a contemporary newspaper account, and reduced to a "bleached skeleton." Five years later the grand plans for its development were finally abandoned.

Piddington's warning came from his impressive knowledge of cyclones and coastal areas. Had it been heeded, a lot of human casualties and damage to property and infrastructure could have been avoided.

Fortunately with progress in technology we have advanced considerably in our ability to quantify and understand natural disasters. Catastrophe modeling and other tools enable insurance companies and governments to better assess risk and develop mitigation strategies. But even when the risks are known, it seems that—as in Piddington's day—nothing will stop people from building homes and businesses on the coast.