Where Have All the Tornadoes Gone?

With the costly 2011 tornado season now three years behind us, and only a few major severe thunderstorm events since then (the 2013 Moore tornado comes to mind), what is going on? The average number of tornado reports from the beginning of the year through March 17 over the past 9 seasons has been 187. In 2014 so far, we are only at 49, lower than any of the past 9 seasons. This chart shows the evolution of the tornado season in recent years: 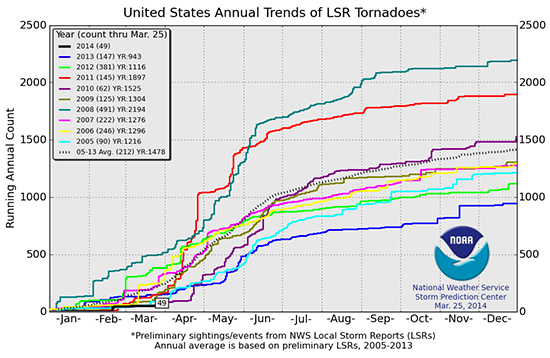 One interesting thing to note is that the 2011 season, with nearly $30 billion of insured loss, had only 122 tornadoes by this date-also below the recent average. Activity picked up in April and May.

So has something changed in recent years? That's a question our clients ask us regularly.

Looking at the overall numbers, the long term average for tornadoes is relatively constant. One thing that may be happening recently is more variability around that mean count. As part of the peer review process for our upcoming severe thunderstorm model, we brought in Dr. Harold Brooks from the National Severe Storms Laboratory to share details of our modeling methodologies and to discuss the latest research coming out of the scientific community. (The same Harold Brooks who was recently quoted in this USA Today article about a "mitigation" feature for tornadoes that our model does not need to account for!) During the day's discussions, he mentioned that in recent years, we have seen most of both the earliest and latest starts to the tornado season-measured by the date of the 50th tornado of the year. Of course, we haven't even seen the 50th tornado of 2014 yet! (Watch this video to hear more of what our peer reviewers had to say.)

AIR's upcoming model will help our clients address this particular issue. It has more "minor" years and more "major" years, even if the overall average storm counts haven't changed. Note in this context, "minor" and "major" simply refer to counts of the individual tornado, hail, and straight-line wind swaths.

It's important to remember that all it takes is one tornado hitting an urban area to rack up the losses. Speaking of that, we often get asked how much damage the worst possible meteorologically plausible tornado could cause. Come to AIR's Envision 2014 to hear us talk about some of the Extreme Disaster Scenario (EDS) events that we have developed for this peril. Hopefully I can convince our marketing group to let me present them as a kind of quiz game-i.e. here are several footprints; which do you think would cause the highest insured loss. I hope to see you there!